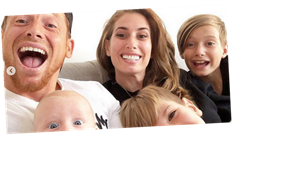 Stacey Solomon decided to speak out on her social media after a troll criticised her for having children with three different fathers.

The Loose Women star, 31, is a mum to Zachary, 12, and Leighton, eight, from different relationships and Rex, one, with her fiancé Joe Swash, 38.

Stacey wasted no time and shared the troll’s message on her Instagram story, which read: “It must be very sad having three different dads for your boys. Always apart. Oh well I suppose you are happy about it.”

Responding to their remark with grace, the mum-of-three began by laughing as she declared: “Woah there, Welma! It’s far too early for that kind of judgement and of course I’m happy about it!”

Stacey then gathered more of her thoughts over their harsh words as she wrote alongside the video: “Never let anyone make you feel like you’re not good enough just because things just happened to work out differently from the ‘norm’.

“Keep doing you the best way you know how. Unconditional love rom anywhere in efferent shapes, & sizes, is all they’ll ever need.” [sic]

Moments afterwards, in another post, Stacey revealed the reasons why she didn’t name and shame the troll on her story.

“I don’t like to share mean people’s names on here because I believe it gives them more of a voice that they don’t deserve… there are so many beautiful souls out there so let’s share their messages and names instead,” she said, alongside a screenshot of kind comments from fans who supported the star.

It comes after Stacey revealed on Loose Women she felt "ashamed" while she was pregnant at 17 with her eldest son Zachary.

Speaking to her co-hosts, she divulged: "I adore my children, I loved giving birth and having babies. I would love to do it again. I don't love being pregnant and I really hate saying that. It's not because I'm ungrateful. I think about all of those people who would give anything to be pregnant.

"It feels like something has taken over my body. I don't have any control any more and everyone is looking at me," before Nadia Sawalha interjected and asked Stacey if the staring was worse when she was pregnant at 17.

The X Factor star replied with: "The teenage mum looks were like…" before making a face on camera as she added: "I just remember feeling so ashamed. I know that sounds awful but when I was pregnant with Zach, what I felt the whole way through was shame.

"I looked like a baby as well. I looked about six. I think people just looked and were like, 'ugh, why is she pregnant?' Maybe it's a bit of a trauma I just haven't addressed."

Stacey, who is now engaged to Joe, previously said she and the former Extra Camp star would love to have more children if they are "lucky enough one day".

London Fashion Week Will Be All-Virtual, With No Live Audiences