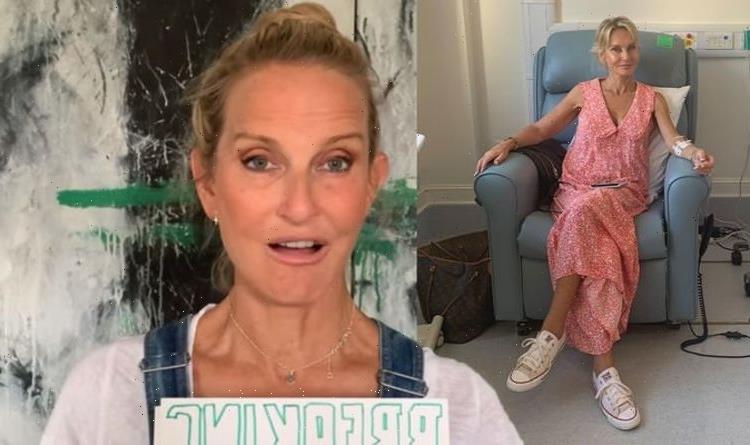 Jacquie Beltrao reveals that her latest scans show no cancer

Jacquie Beltrao, 56, has revealed she has been diagnosed with osteoporosis following her breast cancer battle. The Sky News presenter explained she is battling the condition due to “all the cancer medication.”

Bone injection into my arm (not bones).

According to the NHS website, osteoporosis is a health condition that weakens bones, making them fragile and likely to break. .

The presenter tweeted a photo of herself getting treatment for the condition along with a message to her 83,500 followers.

She said: “Bone injection into my arm (not bones).

“I have osteoporosis because of all the cancer medication so this hardens the bones and I think discourages bone mets – it’s a quickie 15 mins and I’m away #drip #breastcancer #shenanighans.”

The presenter looked as elegant as ever, whilst sitting in a hospital chair, attached to a drip.

READ MORE: Charlie Dimmock had ‘no regrets’ over the Ground Force affair

Jacquie wore a brave smile, and was dressed in a pretty red and white floral maxi dress.

Fans were quick to comment on the star’s bravery.

“You have all of these treatments which most of us could never properly comprehend, but you still show people how treatment and getting through it can be done.

“You look sensational as well, radiant in fact!”

JackfromDevon added: “It never ends, but thankfully treatments are there.

DanCollins2 said: “Very few women can look that good when wired up in such a manner.”

Jacquie joined Sky News in 1992, and has worked for the broadcaster for nearly 30 years.

She first worked as a publicist before later becoming a sports reporter and presenter.

In December 2013, Jacquie first announced she was diagnosed with breast cancer.

Doctors successfully treated the disease, however she announced on social media in June 2020 that it had unfortunately returned.

Jacquie thought she “only had two years left to live”, and took time off from Sky News to rest during her treatment.

In June 2021, the brave presenter received a call while in the car, revealing her tumours had vanished.

Speaking to The Sun, she said: “There were dark days, so to be told there is no evidence of cancer now is unbelievable.

“Previously, I may have been looking at two years. Now I can enjoy life again. I’m living proof that anything is possible.”

Jacquie is still undergoing treatment for osteoporosis, however with the cancer removed, the presenter has a promising future.

How to transform your balcony into a flourishing green space
Entertainment