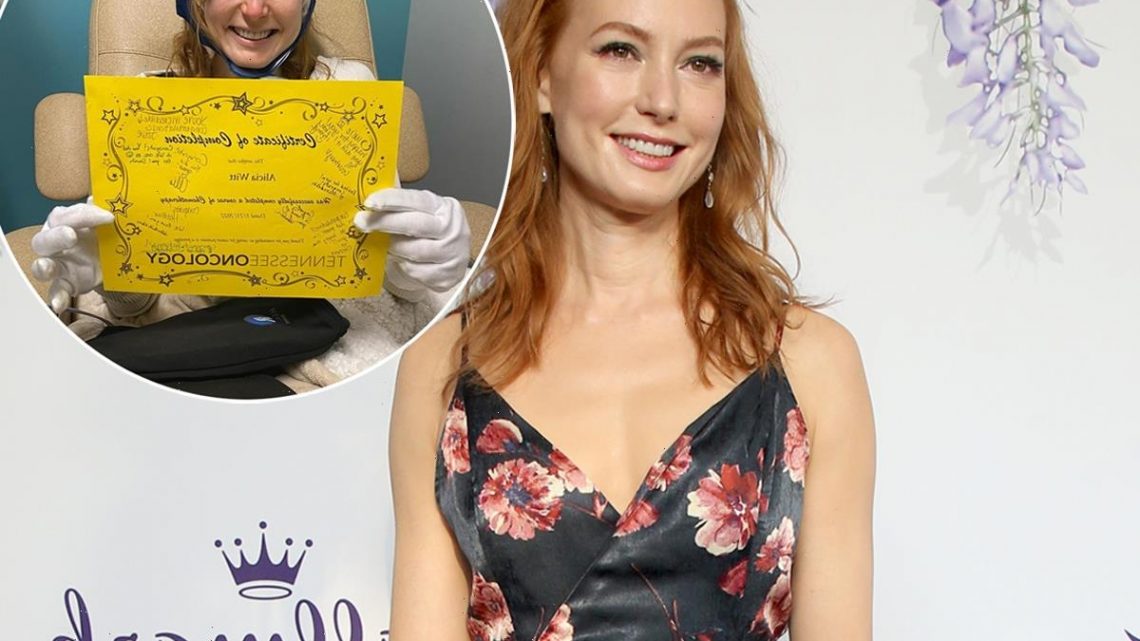 Alicia Witt has been going through a whole other struggle we had no idea about — and now she’s finally opening up about it.

The 46-year-old actress has been secretly battling cancer, undergoing very difficult treatments — all while mourning the sudden loss of her parents, Diane and Robert Witt, who died unexpectedly late last year. Absolutely heartbreaking!

Alicia spoke about her health ordeal in an Instagram post on Wednesday, sharing videos and pictures from when she celebrated finishing her last round of chemotherapy — and was about to undergo a mastectomy. She wrote in the caption:

“Just a little over 2 months ago, i had my last round of chemical therapy prior to my mastectomy. my beloved, brilliant, collaborative, communicative doctor,@habibdoss at @tnoncology, was there to celebrate with us as i rang the bell!”

The Walking Dead alum explained that she had a mastectomy to make sure the disease was “completely healed” from her breast.

As to why she kept her struggle private? She explained:

“i had a tiny crew of human angels surrounding me for all 6 treatments, not only keeping my spirits high, but tending to and changing my @penguincoldcapsglobal. while keeping hair was obviously the last of my concerns on a larger level, i did deeply wish to keep my diagnosis private until it was 100% healed, god willing.”

She continued to thank everyone who helped her keep her cancer battle a secret, expressing:

“i’m so grateful to all those along the way during treatment who honored me by protecting my privacy during these months and grateful to help share that these caps can truly play a huge role in allowing a patient to reveal her journey on her own time, when she is ready.”

She added that the privacy was a “much needed part of my healing” while she mourned the death of her parents, who were found dead in their Massachusetts home last December after performing a wellness check. Their tragic loss, she revealed, also came when she was “beginning” her treatments.

Wow. We felt so bad for Alicia, but we had no idea the extent of what she was going through! To be staring at your own mortality just as you’re mourning your parents… we cannot even imagine. And to come out the other side still so positive and grateful?? Truly inspiring.

Alicia actually first revealed the update on her health last week, telling everyone that she was recovering from the mastectomy and her most recent blood work came back “negative” for any traces of the disease. The Cybill star shared at the time that she got a lump biopsied in one of her breasts after she returned to Nashville “from a 14 city album and book release tour at the end of october.” While her doctors initially told her it was “likely” nothing serious, that turned out very much not to be the case:

“november 4, i was heading out the door for my friend cindy’s birthday gathering when i saw my doctor was calling. ‘oh good’, i thought; ‘i’m about to have confirmation that all is well.’ it wasn’t. everything else came to a grinding halt as i began a crash course on all i would need to learn. meeting incredible doctors, exploring both traditional and holistic therapies, getting further diagnostics to understand and to confirm the scope of what needed to be healed. december 1 i had my first of 6 rounds of chemical therapy: carboplatin, doxorubicin, herceptin and perjeta.”

Read her entire statement (below):

We’re sending so much love and light to Alicia as she continues to heal!