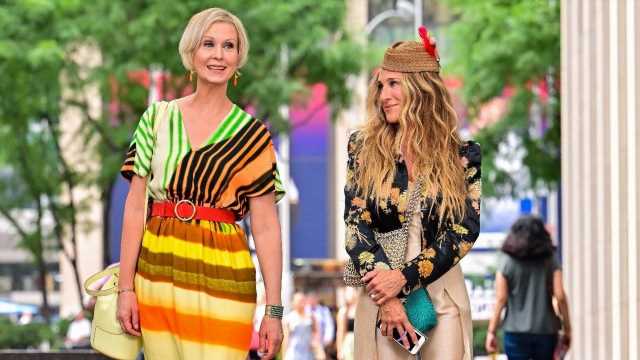 Carrie Bradshaw and Miranda Hobbes are lifelong friends on Sex and the City and in real life! Actresses Sarah Jessica Parker and Cynthia Nixon took a trip down memory lane this week when The Cut posted a throwback photo of the pair as preteens in an early acting project.

“Good morning. Happy Sunday, pleased to announce that we are never not thinking about this,” read the caption for the post.

Nixon, 55, took to the comments section to explain the adorable photo of herself and Parker.

“Good morning! @sarahjessicaparker has been one of my favorite acting partners for more than 40 years!” Nixon wrote. “We are here at 13 and 14 playing Vanessa Redgrave’s daughters in a TV movie called My Body My Child, but we met even earlier recording Little House In the Big Woods on vinyl! (She was Laura, I was Mary) Anyone out there have a copy of the record or a photo of the recording session? I wish I did!”

Parker also got in on the fun, replying to her co-star and pal’s comment, “@cynthiaenixon spot on recollection @cynthiaenixon (one of my most favorite acting partners for more than 40 years!!!) And original title of that movie of the week was The Lilac Season.”

The 56-year-old actress added that she also wished she had a recording of their first collaboration, but noted, “I always say, if my mother doesn’t have it, it likely doesn’t exist. Ah well. The memories of all my time with you sustains me.”

The pair are currently reprising some of their most iconic roles as best friends Carrie Bradshaw and Miranda Hobbes for the Sex and the City HBO Max reboot, And Just Like That…