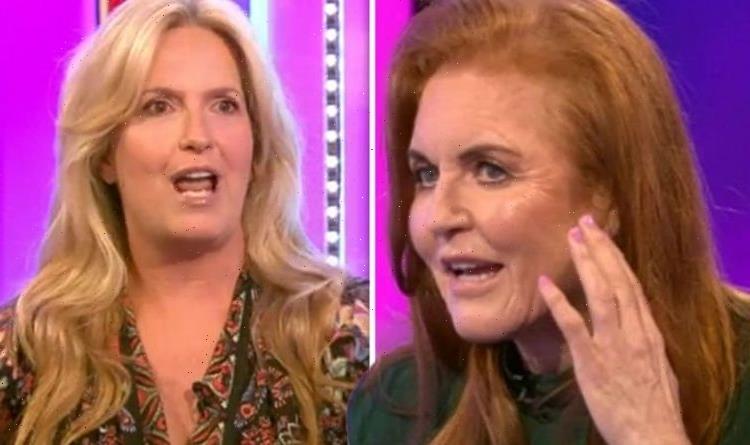 Sir Rod Stewart’s wife Penny Lancaster joined Alex Jones and Gethin Jones on tonight’s episode of The One Show where she chatted about her upcoming appearance on Celebrity Masterchef alongside Dion Dublin. The Loose Women panellist sat alongside Sarah Ferguson as the royal shared details of her debut novel on the BBC show.

Penny, 50, explained that she often does not cook for the Maggie May singer as the family has their own personal chef.

The Loose Women star also admitted that her other half tends to dress up for his daily three-course dinners.

The One Show host, Alex quizzed: “We heard in your house that dinner is quite a big deal. You dress up a bit. Is this right?”

Penny replied: “Well, the husband likes to dress up. Not always in a Celtic kit.”

She continued: “He always dresses for dinner and it’s a three-course meal.”

A stunned Alex queried: “What? Every day… even on a Monday. Because we have pizza and a salad.”

“Yes, every day. Even on a Monday,” Penny chuckled. “One thing that you decide when you have worked hard all of your life is that you are going to gift yourself.

“For Rod, that was a chef. He likes to dine well and wear it well.”

The Duchess of York was quickly questioned about how she likes to dine as The One Show presenter quizzed if she could “compete” with Penny.

Gethin cheekily asked: “Sarah, can you compete with that?”

Making a coughing sound, the Duchess of York appeared to shut down any claims that she prepares any home-cooked meals.

Sarah remarked: “Sorry, I didn’t quite hear. You’re talking about the kitchen and a chef?”

“It’s not your thing then,” Gethin mused.

“I think once I put baked beans in a Carbonara and got it completely wrong.”

She then turned to Penny and congratulated the Loose Women panellist for taking part in Celebrity Masterchef but made it clear cooking was out of the question for the Duchess.

Sarah commented: “But well done, to you [Penny].”

Earlier in the show, the Duchess of York praised Rod’s wife for joining the police force frontline.

“So brave,” she began. “Penny, it’s just so incredible, you’re so brave. You really are.”

Penny was grateful for the royal’s kind words, as she replied: “I appreciate that, thanks.”

The One Show airs weekdays on BBC One at 7pm.