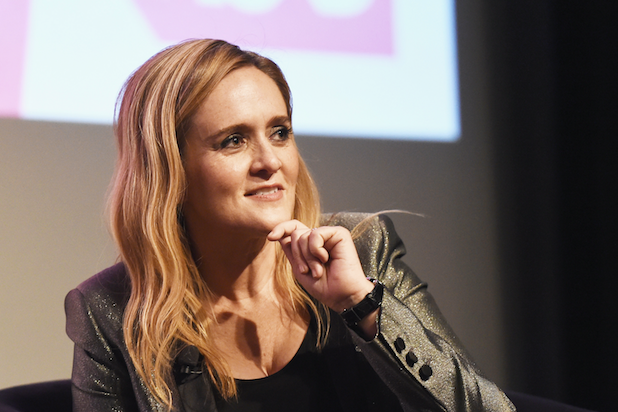 In a segment airing Wednesday, late-night TBS host Samantha Bee talks to and praises three history-makers in the House of Representatives’ fight to impeach President Donald Trump: the first-ever female impeachment managers, or, as she says, wo-managers. (In the clip, the representatives in question seem less-than-impressed with the label.)

The “Full Frontal” host thought it was important to talk to Reps. Zoe Lofgren of California, Sylvia Garcia of Texas and Val Demings of Florida, she told TheWrap Tuesday, because “they did an incredible job.”

“Obviously,” she said, “we didn’t get the result that we were all hoping for but they are three incredible women who argued a very difficult case before an audience of deeply — people deeply uninvested in the process. And I think they argued their case incredibly well.”

The style of the segment was still undeniably “Full Frontal,” with the representatives presented more like storied sports heroes than elected officials. Bee nodded to the fun presentation, saying “We knew that the material was slightly wonky, and so, we’re always in search of fun ways to frame things.”

Trumps acquittal in the Senate trial “felt like a pretty epic defeat,” Bee pointed out, which helped it take on “the mythology of sport.”

The representatives, she added, aren’t well-versed in pop culture references, but they all used sports analogies when they talk, so the framing was a “natural fit.”

As for what she learned from the segment, Bee said she was surprised to find that the impeachment managers themselves were surprised by the ultimate trial results.

Bee admitted she tends to see situations in a glass-half-empty kind of way, but she’ll take their optimism with her as she keeps doing “Full Frontal” into the election season.

“If I can flip my perspective, I do need to have hope that change is possible, and you need to remember that we do have a chance to make something happen. This is our last best chance to make something happen and it’s a huge opportunity if we treat it properly. It’s a huge opportunity to make the change that we really need. We just have to believe that it’s possible and do the right thing. And by do the right thing. I mean get behind whoever the nominee is on election day,” she said, already rallying voters behind whoever ends up challenging the now-acquitted Trump.