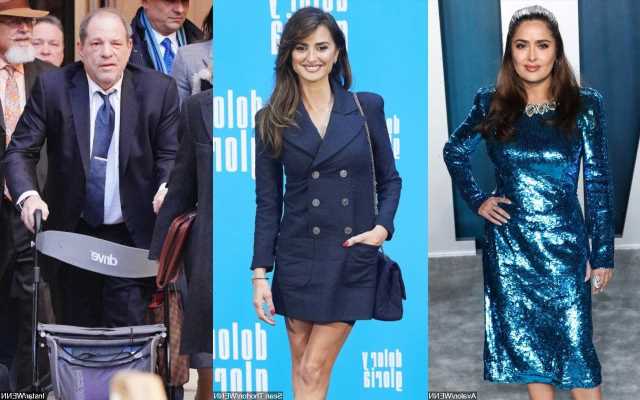 The ‘Frida’ actress also admits that her ‘trauma’ came back when discussing the disgraced movie mogul’s trial and 23-year-sentencing for his criminal sexual act.

AceShowbiz –Salma Hayek had a particular reason why she did not tell Penelope Cruz about Harvey Weinstein’s harassment. Revealing that her “Bandidas” co-star was “very angry” with her for hiding her story, the “Frida” actress claimed she did that because she wanted to “protect” her close friend.

“Some people were very angry at me, like Penelope [Cruz], but I was protecting her,” the 54-year-old spilled in an interview with the Sunday Times. “I kept my eye on their interaction and he never went for her. They [Miramax] were making the best movies.”

“She didn’t have my problem,” the Mexican-American star further explained. “And if I told her it would have affected her choices of things that would have been good for her career.”

Salma previously divulged that she didn’t tell Penelope because she “didn’t realize Harvey was doing it to other people, too.” When speaking to Ashley Judd for “Town & Country” in 2018, she elaborated, “So I thought, ‘Why dump your stuff on someone and take away from their professional relationship with him?’ At that time Harvey was doing the best movies.”

“It took me a couple of months in my head, because I had never told anyone. Just thinking about it weakened me emotionally,” she continued. “And if it affected me in such a way just to think about it, why would I say it out loud? The hard part was to tell my husband, because I had said, ‘Oh, Harvey was a bully,’ but I had never told him all of it.”

Salma detailed her experience with Harvey in a 2017 op-ed for The New York Times. Speaking about the essay, she spilled to the Sunday Times, “Before I wrote the piece I thought I had survived that brilliantly and it was done with. To the point that I could see him and smile and pretend that everything was OK. I had held my own, I was really strong. He didn’t get what he wanted from me.”

Although years have passed since the incident, Salma admitted that her “trauma” came back when she discussed his trial and 23-year-sentencing for his criminal sexual act. “Suddenly the trauma came back,” she confessed. “I had thought that it was completely healed, but it was just hiding. It came back, out of nowhere, and it took me a long time to understand how I had to be with it.”

Mandatory vaccines for aged care workers, quarantine to be separated