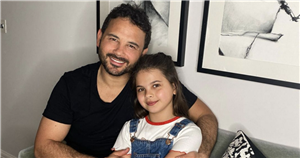 Ryan Thomas has shared a sweet video of his daughter Scarlett with her brother Roman on the set of Waterloo Road.

The 13 year old has landed a role on the reboot of the BBC series, where she will be playing the daughter of her famous uncle Adam, who plays Donte Charles on the series.

Actor Ryan, 38, shares Scarlett, 13, with ex Tina O'Brien, and Roman, two, with his wife Lucy Mecklenburgh – who he also shares daughter Lilah with.

Sharing the clip to his Instagram story, Scarlett can be seen giving Roman a piggy back ride as she walks through the set’s hallway.

"Little bro picking big sis up from work @scarlettjthomas26," he captioned the post and added a few heart emojis.

Roman got to have a tour of the set thanks to sister Scarlett, who landed her role in Waterloo Road earlier this year.

Scarlett’s mum Tina O’Brien, who plays Sarah Platt in Coronation Street, recently opened up to OK! about how proud she was of her daughter’s big role in the series.

She shared: “I am delighted Scarlett will be in the new series of Waterloo Road.

“I am so proud of how hard she has worked over the years at her acting and singing to get to this point. I think she is a joy to watch and I can't wait to tune in as a proud mum for her first episode," she continued.

Ryan and Lucy welcomed a new child into their family, a little girl called Lilah, making them a family of five.

It took the couple three weeks to settle on a name for the birth of their second child. Lucy revealed her name, Lilah Rae Thomas, on Father’s Day.

She shared a sweet snap of her newborn, writing: “Yay!! I finally have a name!!! Lilah Rae Thomas.”

The big reveal came after the couple had previously shared they were finding it “really difficult” to decide on a name, with Lucy teasing fans the day before that they’d finally chosen the perfect one for their little girl.

Taking to Instagram last month, Lucy admitted she is “very likely” to be finished having children and that she “feels very blessed to have a healthy boy and a girl”.

However, she also teased: “But Lilah is so happy and sleeps so well, she’s selling it more and more to me so u never know.”

Meghan Markle says she was 'exhausted' during pregnancies