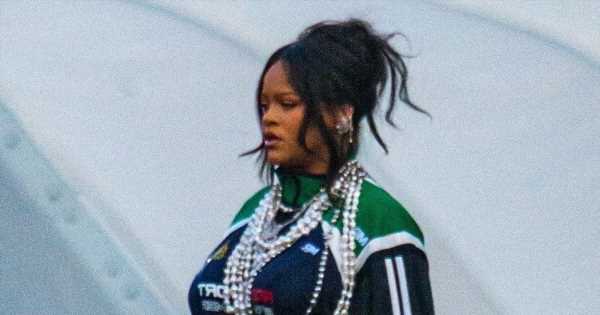 Rihanna just supported boyfriend A$AP Rocky at his concert in France on July 17. The 34-year-old singer, who was recently named the youngest self-made woman billionaire in America by Forbes, was spotted at Lollapalooza Paris, two months after the couple welcomed their first child. Rihanna kept things effortlessly cool in a tracksuit, heels, and a layered pearl necklace, while Rocky hit the stage in plaid pants, a T-shirt, and a pair of green furry sunglasses.

Neither Rihanna nor Rocky has publicly addressed the arrival of their baby, but according to “Entertainment Tonight,” the couple’s son arrived on May 13. “They are over the moon,” a source told the outlet. “She’s been looking forward to motherhood for a long time. This little boy is going to have the best baby fashion.” The baby’s name has not yet been revealed.

News of Rihanna and the 33-year-old rapper’s friendship-turned-romance first broke in November 2020. Back in May, the couple sparked engagement rumors when Rocky dropped his video for “D.M.B.,” which features a handful of visuals alluding to a marriage. Around the three-minute mark, there’s a shot of Rocky wearing grills that read, “Marry Me,” followed by a shot of Rihanna wearing grills reading, “I Do.” At the end of the video, they appear as newlyweds, with Rihanna wearing a red veil and carrying a red bouquet while walking arm in arm with Rocky.

See photos of Rihanna and Rocky’s latest appearance ahead.

Can you spot the difference between the two McDonald’s pics? Only the smartest of people can | The Sun