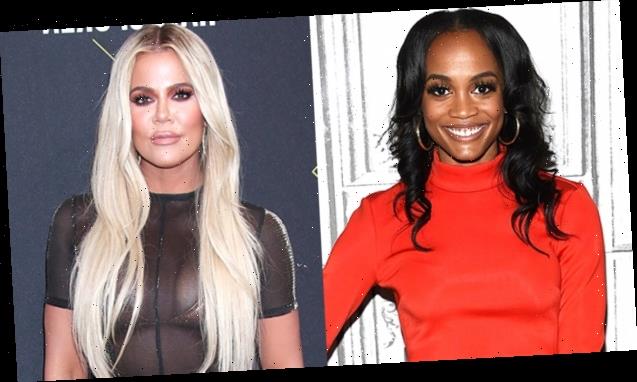 Rachel Lindsay blasted the Kardashian family for creating a ‘goal’ to look a certain way that ‘doesn’t exist’ on her ‘Higher Learning’ podcast.

Rachel Lindsay, 35, wasn’t thrilled with how  Khloe Kardashian, 36, reacted to her seemingly unedited bikini photo making the rounds. The former Bachelorette put Khloe on blast, criticizing the Good American founder’s approach to playing “the victim” in her recent statement about the incident. “What I find interesting is she’s making herself a victim almost in a world and culture that the Kardashians are responsible for. If not the creators of it, they are definitely responsible for perpetuating this school of thought, this practice,” Rachel said on her Higher Learning podcast to co-host Van Lathan.

The attorney-turned-host was specifically referencing the ongoing criticism the Kardashian’s have faced for allegedly editing their Instagram photos to look a certain way. “[Khloe says] there’s pressure to be ‘perfect’ — but they’ve built an entire empire on perfection. You continue to edit your pictures, and photoshop them, you’ve been called out on that multiple times,” she responded to Van, who questioned Rachel on what the “school of thought” is. With millions of social media followers combined, the KarJenner clan are amongst the most influential people on social media — leading many bloggers to copy their looks and photo styles.

“You started this and now these influencers have picked this up and now you have social media influencers who have populated social media feeds to get this image. This ‘Kardashian effect’ — but the reality is, people are emulating something and chasing a goal they can’t even achieve themselves,” Rachel vented. She went on to argue that the goal to look like the women “doesn’t exist,” calling them “so fake, and so plastic, they might as well be animated figures.” In addition to editing their photos, the KarJenner clan have also weathered years of suspicion around alleged plastic surgery procedures. Kris Jenner, 65, documented a neck lift surgery on Keeping Up With The Kardashians back in 2011.

“They’re edited, they’re photoshopped, they don’t necessarily look that way. But it might not be common sense for their audience who is so impressionable, for these fans that laud and praise them. They may not get it to the level we do,” Rachel went on. “And it makes these young women go after something they will never have. Making us desire these unrealistic standards,” she added, noting that she thought Khloe “looked great” in the photo in question. “It’s the most normal we’ve seen her look. She didn’t have the tan, she didn’t have the chiseled features, she didn’t have the smoothness going. I thought she thought looked beautiful…What was upsetting is she’s trying to be a victim in a world she created but she could have taken this moment to be an example and embrace her body, and love for body for what it is,” she concluded.

The photo of Khloe in the leopard bikini was allegedly snapped at the KarJenner’s Easter getaway in Palm Springs.over the weekend. After the photo began being reshared on other social media accounts, it was removed due to a copyright notice that indicated that the rights belonged to Khloe’s grandmother Mary Jo “MJ’ Shannon, 86. A Kardashian staff member later said via statement that the image was shared accidentally by an assistant. Khloe broke her silence about photo on April 7, taking to Instagram live to show her unedited body via video. She then reposted the video, alongside other images, to show fans what she truly looks like.

“I am not perfect but I promise you that I try every day to live my life as honestly as possible with empathy and kindness. It doesn’t mean I have not made mistakes…it’s almost unbearable trying to live up to the impossible standards that the public have all set for me,” Khloe wrote. “You never get used to being judged and pulled apart,” she added, confessing to her love of “a good filter, good lighting and an edit here and there.”

“My body, my image and how I choose to look and what I want to share is my choice,” Khloe also said in her lengthy response. “It’s not for anyone to decide or judge what is acceptable or not anymore…for those else who feel the constant pressure of not ever feeling perfect enough, I want you to now I see you and I understand,” she said to her millions of followers. As for Rachel, she wanted Khloe and listeners to know one thing: “You are beautiful the way you are. You don’t need to look like what you see on your Instagram feed every damn day. My standard of beauty? It’s imperfection. It’s humility. It’s empathy, joyfulness, confidence, and loving others.”