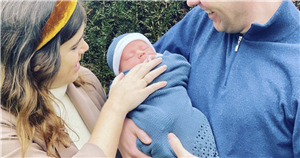 Princess Eugenie has shared a series of adorable new photos of her baby son August, after giving birth to him in February.

Sarah Ferguson’s 31 year old daughter posted the snaps on her Instagram page to pay tribute to her beloved husband Jack Brooksbank on his birthday.

One snap shows dad Jack holding their baby son on his chest while the tot is dressed in a knitted cardigan with his name embroidered in the back.

Little August also has a sweet little white hat on, which has blue and red stars scattered around it.

Meanwhile, a second image sees new dad Jack smiling while looking at the camera, while August is fast asleep while wearing a beige fluffy coat with little ears on the hood.

The tot is also wearing a hat while napping in the black holdall, which is strapped to dad Jack’s front.

Jack is wearing a black hoodie with a khaki green and brown jacket.

The final photo sees Jack walking along a river alone with frees and pretty daffodils surrounding him.

As Eugenie, who recently shared the "joy and love" her son gives her in a handwritten letter, shared the images with her 1.5million fans, she paid tribute to her husband Jack in the caption.

The Queen’s granddaughter wrote in the caption: “You are exceptional.. Happy Birthday my love”.

Fans of the royal then rushed to the comments to wish Jack a happy birthday.

One said: “Happy Birthday to this new Dad” alongside two red heart emojis.

The couple married on 12 October 2018 in St George’s Chapel at Windsor Castle, where Prince Philip’s funeral was held last month.

Eugenie and Jack first met while skiing in Verbier, Switzerland in 2010.

Speaking of the first time she and Jack locked eyes, Eugenie previously told the BBC: “We met when I was 20 and Jack was 24, and fell in love.

“We have the same passions and drive for life. It's so nice that we get to share this moment with everyone, and you get to meet Jack.”

For the latest showbiz reports and breaking news visit http://www.ok.co.uk/celebrity-news.

Check out all the latest hot topics on OK! magazine’s news section and discover exclusive celebrity news about your favourite soap actors and reality stars.

We're also on Facebook.com/okmagazineuk – for the latest online celebrity news, features, galleries and videos throughout the day from your favourite site.

Bill Gates & Wife Melinda Divorcing After 27 Years Together: We ‘No longer Believe’ We Should Be A Couple