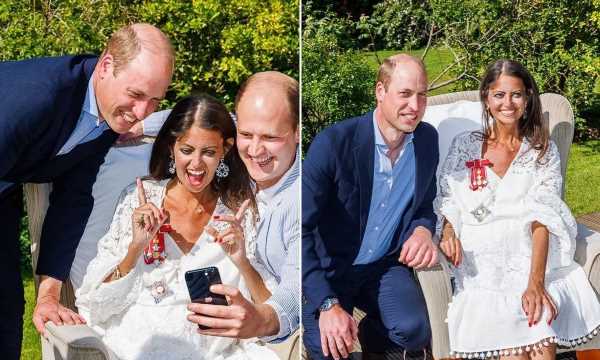 Prince William made a surprise visit to see Deborah James on Friday and gift her with a Damehood, after it emerged that he was the driving force behind the honour.

MORE: Prince William succeeds after pleading with his grandmother the Queen to issue special award

The Duke, who recently paid tribute to the BBC star after she announced she had entered hospice care, joined Deborah and her family for afternoon tea in her garden.

‘It’s quite surreal having a royal pop in at home,’ joked Deborah

“Prince William actually came to our family house today!! I am utterly honoured that he joined us for afternoon tea and champagne, where he not only spent a generous amount of time talking to my whole family but also honoured me with my Damehood,” Deborah shared on social media.

“It’s quite surreal having a royal pop in at home, and yes you can imagine the cleaning antics and preparation went off the scale – but it was all irrelevant because William was so kind and he put us all at ease,” she added.

“He is clearly passionate about improving oncology outcomes as the President of the Royal Marsden. It was such a special day for my whole family, making memories to last a life time. He’s welcome back any time!”

On Monday evening, the 40-year-old presenter of the podcast You, Me And The Big C, and known to many as Bowel Babe, told followers she does not know “how long I’ve got left” in a heartbreaking message.

Pictures shared by Deborah reveal the Prince visited her at home

By Thursday it was reported that Buckingham Palace, Kensington Palace and No10 Downing Street had pulled out all the stops to make the Damehood happen; they are normally only gifted during thr Queen’s New Year Honours.

The Sun revealed that Prince William was the driving force behind the honour, working behind the scenes to make it happen.

“If ever an honour was richly deserved, this is it. Deborah has been an inspiration and her honesty, warmth and courage has been a source of strength to so many people. My thoughts are with Deborah and her family. She has the country’s love and gratitude,” Boris Johnson tweeted at 10pm on Thursday.

Deborah was diagnosed with stage 4 bowel cancer in 2016 and since then has kept her followers up to date with her treatments in candid posts about her progress and diagnosis.

Her latest post read: “The message I never wanted to write. We have tried everything, but my body simply isn’t playing ball. My active care has stopped and I am now moved to hospice at home care, with my incredible family all around me and the focus is on making sure I’m not in pain and spending time with them. Nobody knows how long I’ve got left but I’m not able to walk, I’m sleeping most of the days, and most things I took for granted are pipe dreams.”

Two days later, William and wife Kate shared a special message with fans, writing: “Every now and then, someone captures the heart of the nation with their zest for life & tenacious desire to give back to society. @bowelbabe is one of those special people.”

The pair concluded: “Deborah, our thoughts are with you, your family and your friends. Thank you for giving hope to so many who are living with cancer.” They signed off with the initials “W&C” which confirmed it was sent directly by the two royals.

Hello! understand the pair have also made an anonymous donation to Deborah’s Cancer Research fund which so far has raised over £5 million. Deborah has been treated at the Royal Marsden hospital, of which William is patron, and it is one of the beneficiaries of her fund.

11 Exciting Unisex Fragrances For Him And Her