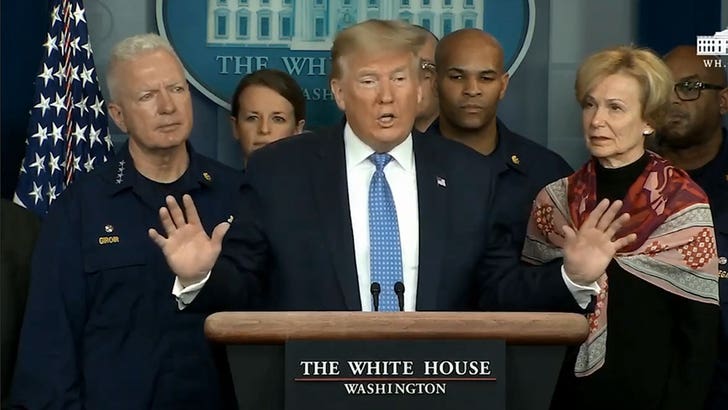 President Trump had a strong message for Americans who are flocking to their local grocery stores and clearing the shelves in a frenzy — take a chill pill, yo … please and thanks.

DT and his coronavirus team — including Pence — hit up the Press Room Sunday for an update on the global pandemic … which is spreading by the day here in the States. Trump started with good news for Wall Street … federal interest rates were just cut to 0%-0.25%!

He then hopscotched to a discrepancy that Google cleared up about a website they’re launching for coronavirus related information — something Trump alluded earlier last week, but which was fact-checked as Google’s parent company, Alphabet, handling it.

Google eventually came out and backed Trump — whom people criticized for spreading, at first, seemingly incomplete info — and DT hit that point home at the podium.

He did a mic drop of sorts … you can watch for yourself.

Anyway, then came the directive from POTUS himself straight to the American people … many of whom are panic buying and stockpiling supplies right now … while leaving the shopper behind them high and dry. Trump says he’s spoken to a bunch of grocery store CEOs … and they asked him to deliver a message — STOP BUYING STUFF YOU DON’T NEED!!!

Donald had his own way of putting it, but you get the picture. He says stores will remain open during these crazy times and they’ll continuously try to keep restocking products.

Tom Hanks Thanks the 'Helpers' in After Coronavirus Diagnosis
Entertainment