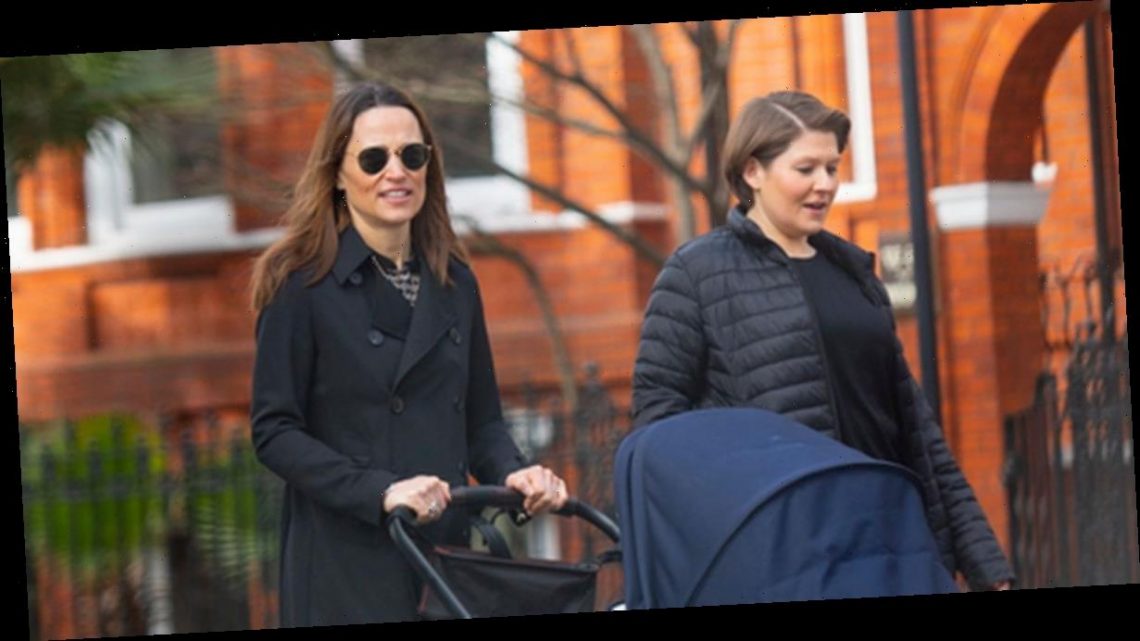 Pippa Middleton has been spotted out with her newborn baby daughter Grace for the first time after giving birth.

As Pippa and husband James, 45, announced the happy news, they revealed they called their new addition to their family, Grace Elizabeth Jane Matthews.

Now, a week after welcoming her baby girl into the world, Pippa has been seen looking stunning as she pushed her daughter Grace in a pram.

Pippa, who made a sweet tribute to Kate with her baby daughter, looked gorgeous in a black trench coat with a brown and black patterned skin-length dress underneath.

She opted for comfortable footwear as she sported a pair of white trainers with a chunky sole.

The Duchess of Cambridge’s sister shielded her eyes with a pari of dark aviator sunglasses with a gold trim.

Pippa wore her brunette locks down in a wavy hairstyle with a middle parting and looked radiant while pushing her newborn baby girl in a pram.

The new mum-of-two clutched on to the handle of the navy blue and black pushchair while heading out for a stroll.

It comes after a Kate Middleton's sister Pippa's representative told OK! online that Pippa had given birth.

In a statement they said: “I’m delighted to confirm, Grace Elizabeth Jane Matthews was born around 4.22am this morning (Monday 15th March) weighing 6lbs 7oz. Mother and baby are doing well.”

Pippa kept away from the limelight during her second pregnancy. She made a rare appearance in December at the Mary Hare School for deaf children and young people.

The school posted an image of the mum-to-be on their Instagram page which saw her in an amazing flashing light Christmas tree jumper.

The account captioned the image: “Pippa Middleton (our ambassador) joined the pupils on Zoom today, to present the awards for the Christmas card designs. Well done to all our primary and secondary pupils who received awards and joined in the spirit of Christmas jumper day!”

Pippa and James' daughter Grace Elizabeth, who shares the same name with Her Majesty Queen Elizabeth II, is the fifth grandchild of Kate and Pippa's parents, Carole and Michael.

The couple became parents after marrying in a stunning ceremony at St Mark's Church, at Englefield Estate, Berkshire, near the Middleton family home, called Bucklebury Manor in 2017.

Here’s How To Watch Netflix’s ‘Tiger Queens: The Tiger King Musical’ On TikTok