Home » Celebrities » Piers Morgan Twitter: Star hits back at Will Carling as he wades into Jesse Lingard spat Piers Morgan Twitter: Star hits back at Will Carling as he wades into Jesse Lingard spat

Piers Morgan, 54, recently hit out at Jesse Lingard, 26, on Twitter after the Manchester United footballer joked about wanting to “punch” him in an interview. The feud between the pair was ignited when the player was asked by LADbible: “If you had to punch a famous person, who would you punch?” Without hesitation, the midfielder replied: “Piers Morgan.” Refusing to rise above the comment, the Good Morning Britain presenter issued a biting retort on the micro-blogging site.

He wrote in view of his six million Twitter followers: “Mate @JesseLingard – you’re a 5ft 7in, 128lb stick insect with the muscle power of a neutered Poodle,

Although Jesse has not yet responded to Piers’ insults, former England rugby player Will Carling, 53, took the opportunity to wade into the argument on the social media platform.

Addressing the outspoken TV personality, he wrote in view of his own 165,000 followers: “Well @piersmorgan you’re a 5ft 9in, 250 lb ageing hippo with the eating ability of a blue whale & intimidation of a cowering Doe Deer – So maybe give @JesseLingard a break…”

After spotting Will’s tweet, Piers wasted no time in responding with a particularly savage comeback.

The Piers Morgan’s Life Stories host retweeted the sportsman’s post and added the caption: “Morning Fatboy, I’m 6ft 1in, 215lbs, proudly eat lashings of red meat & the only thing I’d break is you. 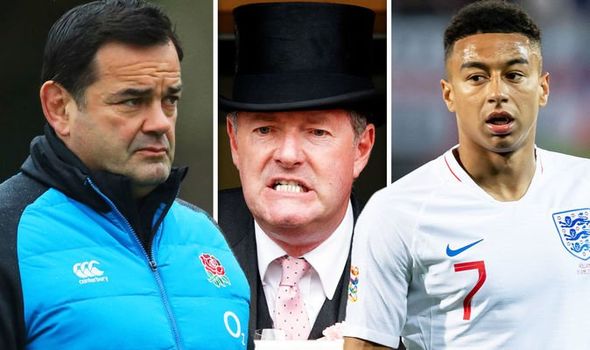 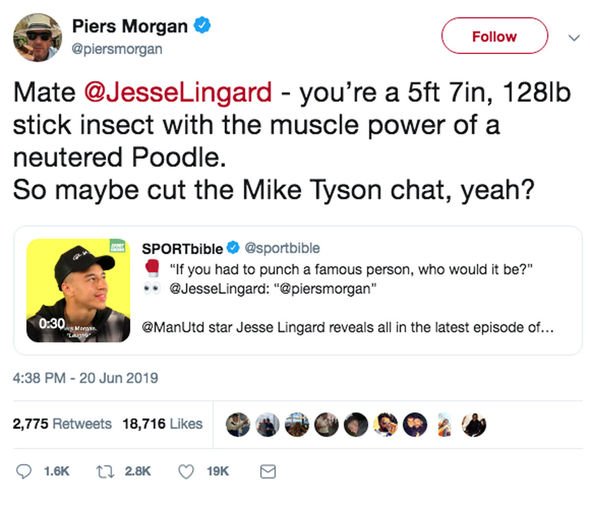 “Snapping your portly torso in half with my bare hands like Bruce Lee chopping up bricks.”

Piers’ followers were quick to comment on the war of words between the stars.

One amused fan wrote: “Loving the saltyness and its not even 7am yet.”(sic)

Another replied: “Get in Piers my money is on you.”

A third addressed Will as they responded: “@willcarling, I may not be @piersmorgan biggest fan but @JesseLingard started this whole thing by saying he would punch Piers, so if u feel the need to start on someone why not make it Lingard. #letsjumponthebeatpierswagon.”(sic) 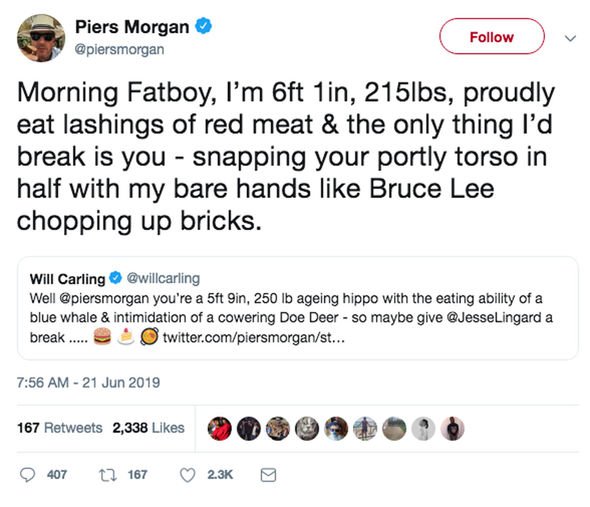 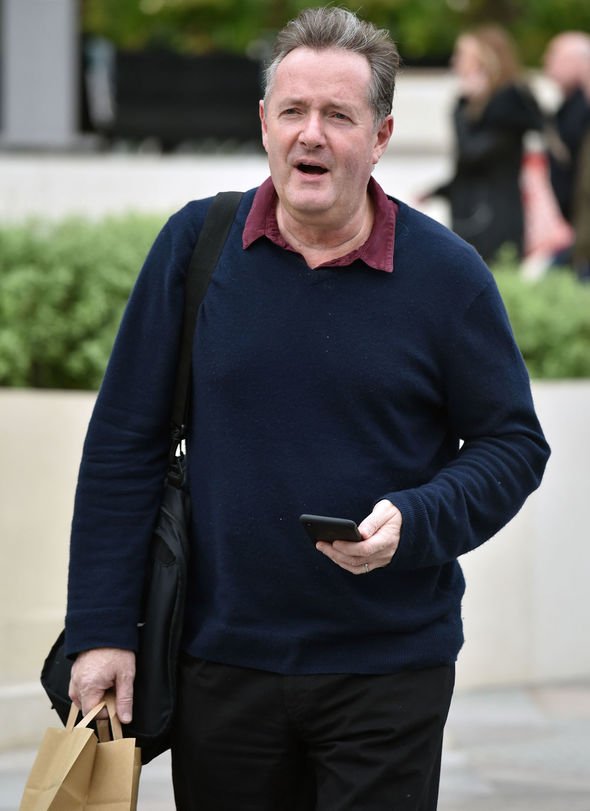 The debate kicked off between the duo when Jesse welcomed his new teammate to the squad in a tweet which read: “Hello, is that @Alexis_Sanchez? Welcome to @ManUtd.

“I knew you wanted to come Milly Rock with the mandem,”(sic) he added.

Piers, who is an Arsenal fan himself, responded to Jesse’s post: “He’s taking your place sunshine, enjoy the bench.”

The Man United favourite then hit back at the presenter: “‘YO PIERS YOU WANNA COME OUT HERE,’”(sic) Jessie quipped, in reference to Arsenal’s announcement campaign for their replacement striker, Pierre-Emerick Aubameyang.

'NCIS': Will Season 17 Be The Last For Sean Murray's Timothy McGee?
Entertainment