Good Morning Britain presenter Piers Morgan, 55, has hit back at a Twitter user after they shared a resurfaced photo of him and Nigel Farage, 56, at a cricket match. In the snap, the outspoken journalist and the leader of the Brexit Party were pictured at the event with glasses of red wine in hand while smiling for the camera together.

While posting the image of the duo, the Twitter user said that although Piers is “saying the right things now” the picture of him and Nigel “wasn’t taken so long ago”.

However, after Piers spotted the post, he was quick to hit back and insist he “can be “friendly” with people in spite of their political opinions.

The star retweeted the Twitter user’s message in view of his 7.6 million followers and explained their meeting, writing: “That was taken at Lord’s. 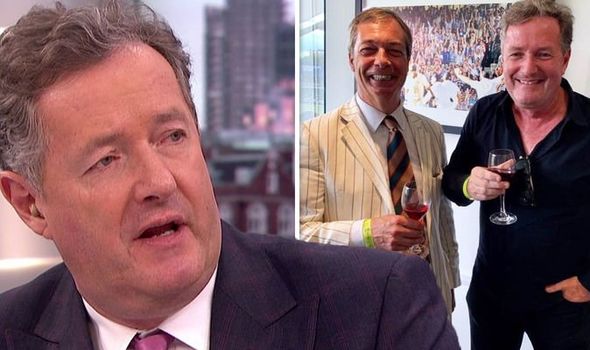 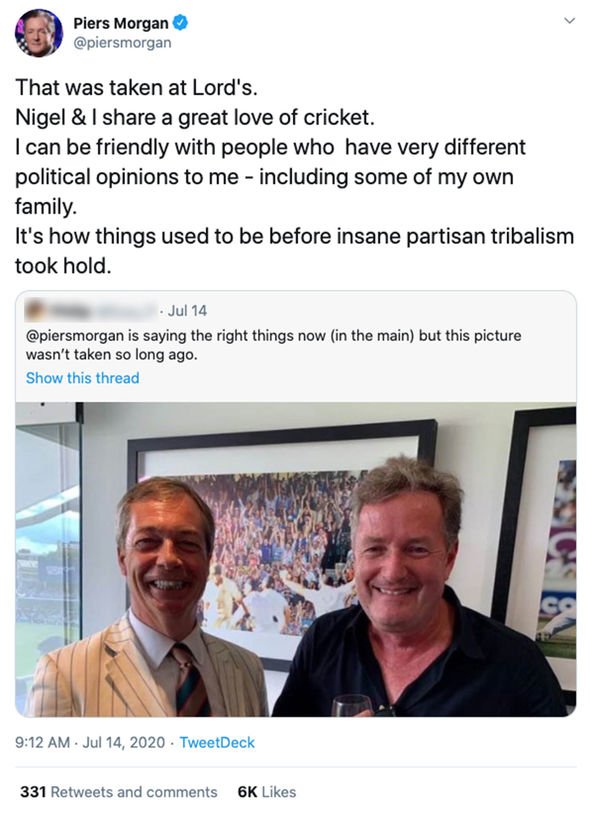 Piers went on to say he also has differences of opinion with some of his own family and slammed “insane partisan tribalism” for turning people against each other.

He continued: “I can be friendly with people who have very different political opinions to me – including some of my own family.

“It’s how things used to be before insane partisan tribalism took hold.”

Piers’ followers took to the comments section to share their thoughts on his views. 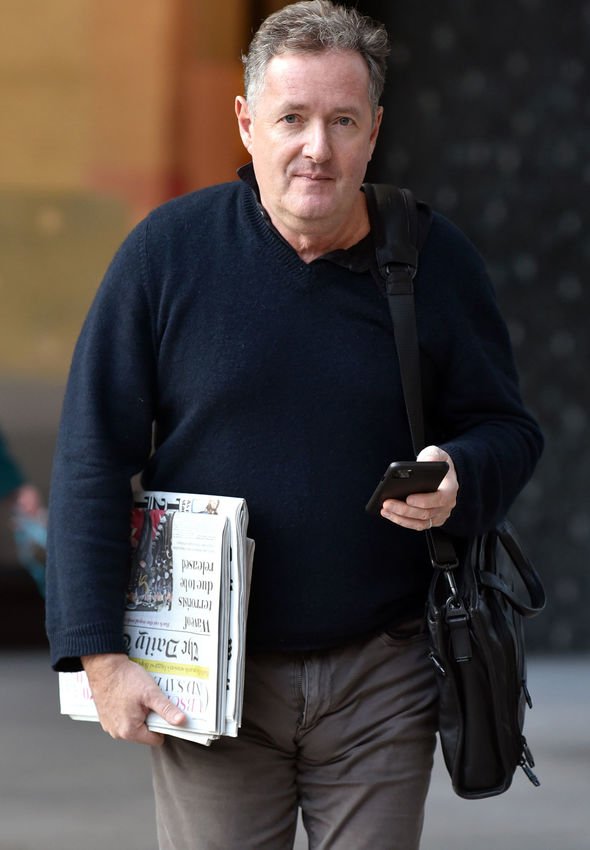 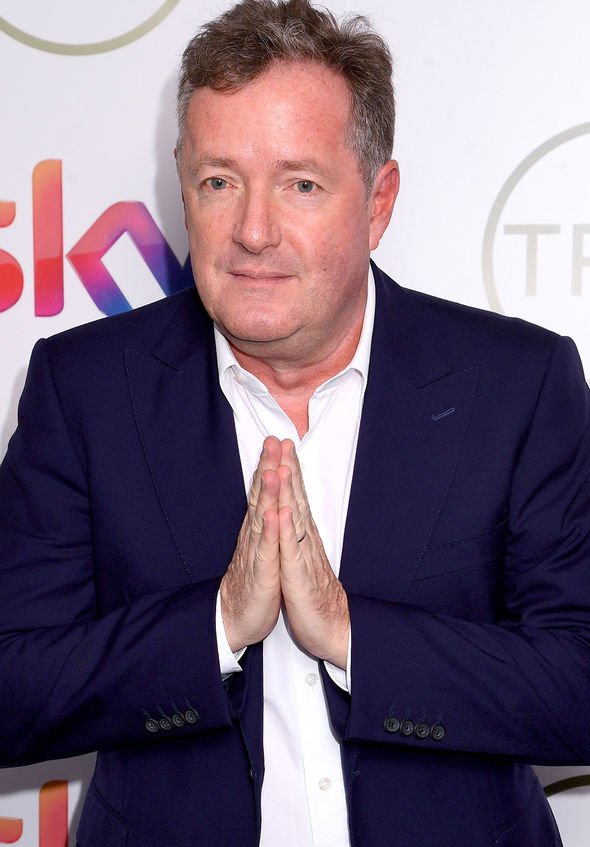 One person agreed with the host’s argument and wrote: “Also, ‘saying the right things now’ happens to be subjective…why do people (typically those on the left) take such issue with those who don’t conform to their way of thinking?”

A second fan commented: “Actually something I agree with for a change. Not sure when it happened but you’re not allowed to have an opinion any more, ‘you are wrong and must be cancelled!’”

Others disagreed, with a Twitter user replying: “I wouldn’t boast about this… You should choose your friends more carefully, and if you can’t – don’t tell us about them.”

A second person added: “Tbh I draw the line at people who stoke the fires of division and hatred for personal gain.”(sic)

Piers’ comments about the resurfaced snap come after he sparked backlash amongst Twitter users by revealing he has written a new book, after teasing his followers with a “big announcement” yesterday.

The star confirmed in a Twitter post: “BREAKING: I’m delighted to announce my new book: ‘WAKE UP – Why the ‘liberal’ war on free speech is even more dangerous than Covid–19.’ Out on October 15th in hardback, ebook & audiobook read by me.”

Although Piers was “delighted” to share his news, some Twitter users were less than impressed and admitted they thought the journalist’s announcement would be “bigger” than it was.

One person seemed disappointed, writing back: “We waited all day for this?”

Another added: “Ok …Come on Piers …We’re waiting for the big news…”

The backlash sparked by Piers’ tweet comes after many fans speculated his announcement would be related to his hosting role on Good Morning Britain.

Worries about Piers’ future on GMB came after he hinted at his plans to leave the ITV programme before embarking on his break from the show alongside co-host Susanna Reid.

While addressing a claim from a viewer who thought Piers was leaving the ITV programme at the end of the year, the television personality said: “I’m not… Leaving next year… Possibly.”

When can eyebrow salons open again? – The Sun

Where Is Cardi B Going in This Wave-Print Chanel Mini and Blue Birkin? The Pool, Naturally
Entertainment