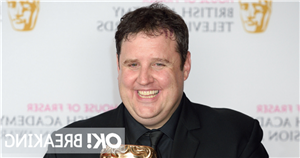 Comedian Peter Kay will embark on his first live tour since 2010.

The comedian, who has been largely absent from the public eye for the last four years, will embark on an arena tour spanning from this December to August 2023.

He said: “It’s good to get back to what I love doing best, stand-up comedy and if there’s ever a time people need a laugh it’s now. And with the cost of living at an all-time high, ticket prices are starting from £35. The same price they were on my previous tour in 2010.”

Kay will begin his tour on December 2 at the Manchester AO Arena before visiting locations including Birmingham, Liverpool and Dublin, ending in August 2023 at the Sheffield Utilita Arena.

After he abruptly cancelled his 2018 tour due to “unforeseen family circumstances”, Peter has largely kept out of the spotlight.

The comedian has kept the details of what happened private.

Earlier this year Peter he briefly returned to the spotlight with a short charity tour in aid of Cancer Research.

Your weekly tarot horoscope for November 6 to November 12
Entertainment