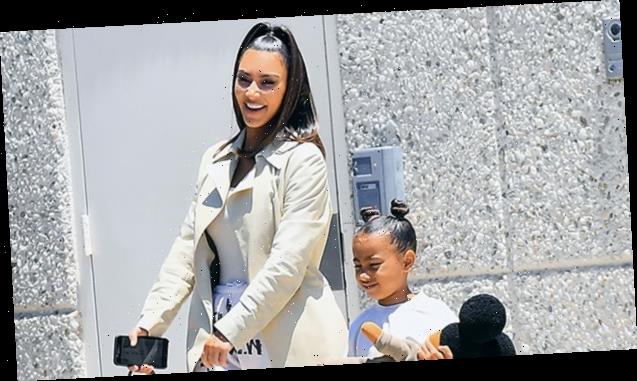 Kim Kardashian received a sweet and unexpected surprise from her oldest child, North West, when she entered her bathroom on Jan. 31! The 7-year-old wrote her mom a cute note on a toilet paper roll!

North West is seriously so sweet! “Mom, I love you,” the fashionable 7-year-old wrote in black marker on a roll of toilet paper as a surprise to Kim Kardashian. The mother of four shared a snapshot of North’s artwork in a post on Instagram on January 31, with the caption: “I love you too North, forever!!!”

The SKIMS founder is currently on a tropical “girls trip” with daughters North and Chicago, who just turned three on January 15. Over the weekend, Kim, 40, shared a number of snaps of the trio cuddled up together while taking a sunny stroll on a boardwalk. Her two sons, Saint, 5, and Psalm West, 1, whom she shares with husband Kanye West (along with their two daughters) don’t appear to be present on the trip.

Additionally, Kim’s sisters, Kourtney and Khloe Kardashian, along with Kylie Jenner have been sharing similar vacation snaps on social media — leading fans to believe they’re also present on the trip. Though, Kylie made have jetted home to Calabasas, CA, to celebrate daughter Stormi Webster‘s third birthday on February 1.

Kim’s latest getaway comes amidst her martial troubles with Kanye, who’s been away from his wife and kids at his Wyoming home since around Christmas Eve. The KKW Beauty founder spent the holidays with her kids at Kourtney’s home in Calabasas — where most of the Kardashian-Jenner family resides. While Kim hasn’t publicly addressed the couple’s marital status, she has been spotted on social media without her wedding ring on a number of occasions.

Despite Kim’s unwavering support to Kanye throughout 2020 — during his bizarre his Twitter rants and even his short-lived presidential campaign —  the couple appeared to quietly distance themselves from one another as the year came to an end. Adding more fuel to the divorce speculation, Kim and Kanye haven’t been photographed together since October of 2020.

In December 2020, a source told HollywoodLife that Kim and Kanye were “struggling to stay together as a couple and have for quite some time now,” adding that they were “living separate lives.”

Just a few days into 2021, Kim and Kanye’s marriage was headed for divorce, according to three different reports. PageSix, which was first to report the troubling news, claimed on January 5 that “divorce is imminent” for Kimye. The outlet also reported that Kim hired Laura Wasser, a powerhouse celebrity divorce attorney — who’s worked with the likes of Angelina Jolie, Britney Spears, Heidi Klum and Gwen Stefani, among many other big Hollywood names.

HollywoodLife reached out to representatives for both Kim and Kanye for comment, but did not hear back at the time. We can not independently verify the divorce reports, and Kim and Kanye have not confirmed or addressed the claims.

JetBlue to launch all-business-class flights to London this summer

Your Wardrobe Has Been Waiting for This Slouchy Sweater
Entertainment