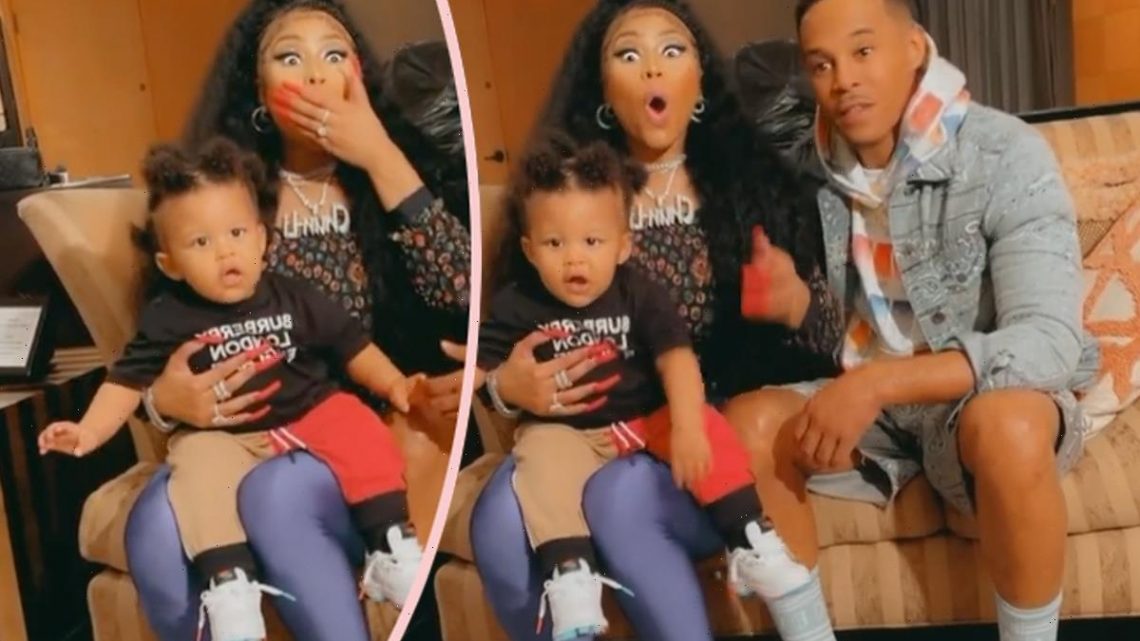 Nicki Minaj is giving fans a glimpse into her life as a first-time momma!

On Thursday, the 38-year-old rapper shared some sweet new videos on Instagram of her and husband Kenneth Petty bonding with their 11-month-old son, who they affectionately nicknamed “Papa Bear.” In the footage, Nicki had the little one on her lap as she told him:

Shortly after, the baby boy responded with a simple “hi” while the artist held up his hand for a wave. Of course, this caused Nicki to gasp at Papa Bear. Kenneth, who recently filed to remove himself from the sex offender registry, did not say anything but appeared just as happy as his wife to hear their son seemingly say his first word. She captioned the cute video:

In another video afterward, Nicki urged the kiddo to say more words such as “I know I’m a cute boy,” but no luck. Which is surprising because he definitely IS a cute boy! LOLz! But the polite greeting apparently was all he was willing to say for the day! Take a look at the new clips (below):

As fans know, the Super Bass hitmaker has remained pretty private when it comes to her child — so much so the couple has yet to reveal his actual name to the public. Minaj also did not even share the first photos of “Papa Bear” until January 2021, just three months after he was born. She wrote at the time:

“#PapaBear thank you so very much for choosing me to be your mama. Wishing you guys a happy & prosperous New Year. Thank you for your love & support throughout this journey. It’s meant so much to me. Becoming a mom is by far the most fulfilling job I’ve ever taken on. Sending love to all the superhero mothers out there. Big hugs to all the women who have been pregnant during this challenging time.”

Then, in May, she shared an update with fans by posting a video of her son attempting to walk with the help of his dad. Nicki can be heard encouraging Papa in the background of the video, asking:

Ch-ch-check it out (below):

And while things are seemingly going well with their kid, it is a completely different story in terms of other aspects of their personal lives. In case you missed it, Nicki and Kenneth were recently sued by the woman who the songwriter’s husband was convicted of attempting to rape in 1994. In the filing, Jennifer Hough claimed the duo were harassing and threatening her to remain quiet on the incident for several years. So messy…

Reactions to Minaj’s rare family video? Let us know in the comments (below).