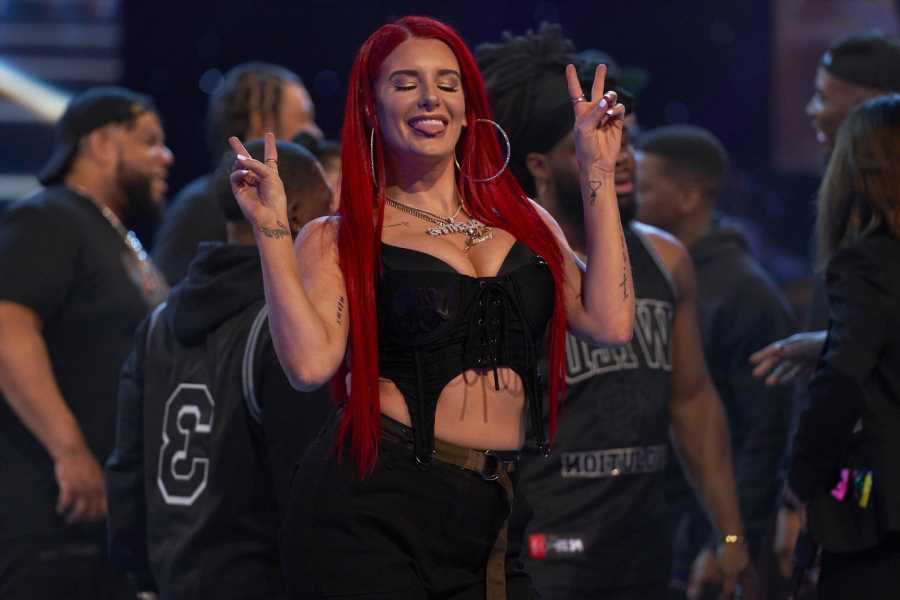 You’re trapped in a carnival of horrors. Every move you make is crucial. If you open the right door, you’ll survive, but others will send you falling down a slide of doom for eternity, getting your head bitten off, turned into a chicken, or sent into space. Wait, no, these are plots from the Goosebumps books.

Later today, Wild ‘n Out‘s parent companies MTV Entertainment Group and ViacomCBS will announce an hour-long, interactive special for the show, which will start at 4:00 p.m. ET, preceding the official premiere of the 16th season. The special — allowing fans to vote in real-time, send lyrical suggestions, and choose games for the participants to play — was created in partnership with tech company Stage Ten, which designed the globally interactive video players.

The ability to captivate kids with underdeveloped attention spans was what made those choose-your-path Goosebumps plots so incredibly successful and helped create a multi-billion-dollar franchise. Since the average attention span has only plummeted in the multi-screen lifestyle era, it was perhaps only a matter of time before this storytelling technique was modernized to fit within the digital world.

“As we’ve learned from gaming and even TikTok, interactivity and being able to be immersed in making decisions while you’re watching content is very important,” Lily Neumeyer, EVP and head of development at ViacomCBS’ MTV Entertainment Group, tells Rolling Stone, adding that she’s been fascinated by non-linear storytelling methods for a while. In the last four years, Neumeyer’s team met with a plethora of tech companies and virtual platforms. Coincidentally or not, TikTok also launched in the U.S. four years ago, in 2017 — right as MTV, VH1, and cable TV channels in general were drawing particularly dismal viewership. For the networks, commanding modern audiences was already tough enough before an always-accessible smartphone app mesmerized a burgeoning generation with magnetic stare-and-scroll entertainment.

“We [ViacomCBS] own two brands, Nickelodeon and MTV, with very young consumers. So what is their expectation of the future?”

Many cable TV gatekeepers have been slow to adapt, digging their heels in the sand and letting platforms like Netflix, Hulu, and Amazon eat their lunch. Neumeyer, although obliged to follow age-old corporate protocol, says she refuses to stand idly by. “Other options of entertainment, like gaming and VR are moving exponentially forward to create environments wherein people are not only watching, they’re participating — and, at Viacom, we have a whole team that’s looking at all these things,” she says. “We have budgets for exploring how entertainment is moving into the future. We just don’t make a lot of noise about it. Remember we own two brands, Nickelodeon and MTV, with very young consumers. So what is their expectation of the future?” Neumeyer says the MTV group “can’t be left behind”: “Just because we grew up watching one flat screen with pixels, we can’t assume that’s what they want.”

Because of the improvisational nature and established fanbase of Wild ‘n Out, it seemed like the perfect guinea pig — as long as it could get the ideal tech partner. “We talked to other people that we really liked, but it wasn’t the right marriage of creative and tech,” Neumeyer says.

The Stage Ten team, however, comprises multiple employees with backgrounds in TV. “We understand the difference between live content and alive content,” says Michael Gaston, who left his CEO position at Cut.com, a company he founded, to join Stage Ten as its president last year. Gaston says: “When I was younger and sitcoms would do their live episodes, the whole point was that no one fucks up. They try really hard to not break, and the audience sits in to watch the risk of that happening, waiting for them to mess up. With alive content, the point isn’t to dominate your point of view on things. It’s in collaboration. That means it’s moving, it’s changing, it’s evolving. It could be messy, but that’s sort of the point. With Wild ‘n Out, they already have to ad lib and move with things, so this is a really easy way to insert the audience.”

Stage Ten turned heads last year when the company orchestrated Cardi B and Megan Thee Stallion’s “WAP” music video premiere. It is now working on advancements in e-commerce. During Wild ‘n Out episodes, cast members will don merch that viewers can order at first sight, thanks to a Shopify interlay. (The greater significance of this is colossal: Imagine watching a new episode of Sex and the City and being able to nab a special-edition pair of Manolo Blahniks only while they appear on screen for the first time, or only being able to get Taylor Swift’s new cardigan during the “Cardigan” music video premiere.  And what if that music video had multiple endings so the fan could tell Swift to jump into the portal inside her piano or climb out the window behind her? Now that’s incentive to tune in, my dear Watson.)

More broadly, interactive entertainment might serve as a tool for psychological advancement or rejuvenation. “In a world where we’re all looking at three different screens while we’re doing something else, how does that relate to the kinds of conversations and relationships that we have outside of that?” Gaston says. “Are we ever really present? This technology trains us to be present and active. It trains us to participate in what’s unfolding in front of us, because you can’t be on multiple screens. In a world where everything is on-demand, truly interactive content has to be live.”

“Basically, Covid happened and we were like, ‘Oh, we live in a simulation. Let’s go switch algorithms.’”

Gaston estimates that the pandemic accelerated the research and development of interactive technologies by about five years. Prior to the worldwide shutdown, he says, “people saw it as a future thing.” As Covid-19 wrecked in-person broadcast plans at TV companies around the world, showrunners needed newfangled solutions and started considering adding interactive layers for the first time: “Basically, Covid happened and we were like, ‘Oh, we live in a simulation. Let’s go switch algorithms.’”

The Wild ‘n Out deal marks the first time Stage Ten has worked with a television network of this size and reach. “We’ve been flirting with MTV in particular for a while,” says Gaston. “There was something really delightful about the idea of working with a company that has a history of the kind of innovative and provocative storytelling that pushes culture forward.” But Stage Ten put a lot more on the proverbial conveyor belt after the Viacom contract ink dried: Gaston says he’s currently working on a project with clothing brand Tommy Hilfiger and has been talking to some “really big” award shows. He adds that Stage Ten is also looking at ways to make in-person concerts more interactive — a topic more and more music companies are exploring.

Stage Ten has big goals with customizable e-commerce. Gaston says he’s tired of the lazily produced, data-based targeted ads that have flooded the Internet. “What’s beautiful about this kind of content is that it does what the Internet is supposed to do: it disintermediates,” he says. “You’re in a relationship with the audience. What happens to storytelling in a world where the lines between the creator and the consumer disappear and you’re co-creating things together?”

To experiment with Tuesday night’s interactive capabilities, viewers must watch the Wild ‘n Out special on the show’s just-launched microsite, playwildnoutlive.com. There, for the first time ever, “the audience is going to be in complete control,” Neumeyer says. (Those who prefer the passive experience will be able to watch the show on VH1; it will also be simulcast on Facebook, YouTube, and Twitter.)

Goosebumps, ultimately, stopped publishing books because the series was deemed too frightening for kids to handle. VH1 has no such qualms. Neumeyer’s long-term goal is to learn from the experiment and adhere the tech to other intellectual properties, every time making the integrations more sophisticated. “One day, you’ll be actually inside the show,” she vows, nodding at the metaverse, Silicon Valley’s new favorite buzzword. “Obviously, we’re not there yet, but every step that we take is a test.”

Robin Comes Out as Bisexual in DC Comics Series
Entertainment