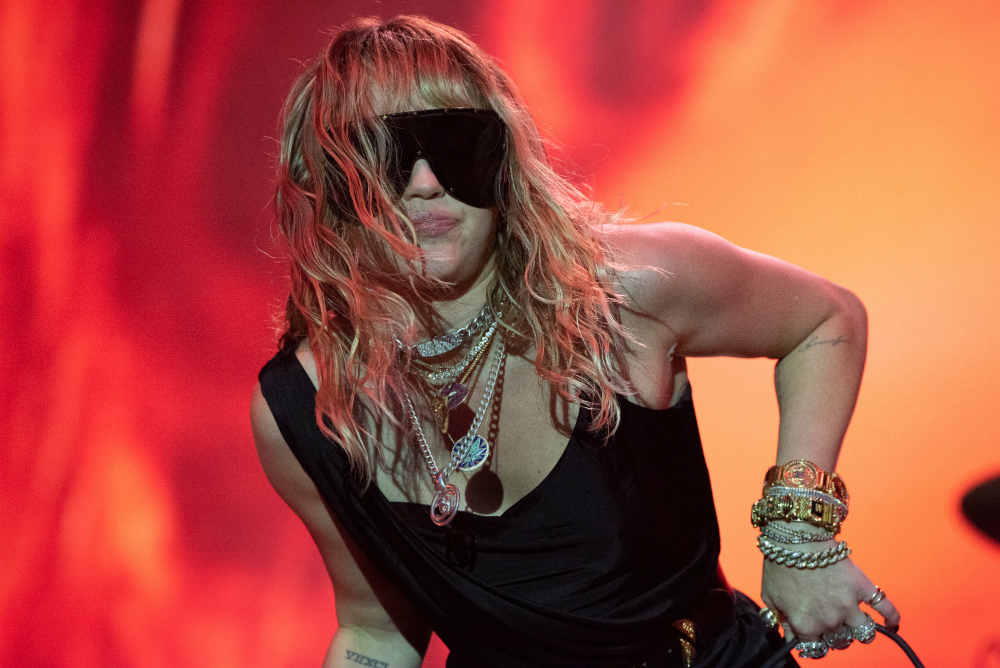 Miley Cyrus likes to reinvent herself with each new album. That’s fine, but makes it hard to keep up. I actually thought she was in her reverting to her country roots phase but that was two releases ago. Following up from whatever her last incarnation was, Miley is now reverting to her club music phase with her new EP, She is Coming. I like Club Miley, I think she does well on that platform. However, I’m not feeling She is Coming yet. So far I only like Cattitude, which is derivative of Missy Elliott (plus RuPaul is featured and is very good). Much like her last club phase was about drugs, this one is about having sex or specifically, Miley having sex. And what’s the best way to promote an album all about sex? Prophylactics, of course. Not just any condoms, either, but $20 a pop condoms that have Miley’s new catch phrase and phone number (?) on it.

Miley Cyrus‘ new EP, She Is Coming, dropped on Friday, and a slew of new merchandise accompanied the release — including her own branded condoms.

The condoms, which are sold individually for $20, come in a black wrapper with “She is coming” and “1-833-SHE-IS-MC” written on the outside in white. The phone number is also featured on a T-shirt and sweatshirt available on her website. Other merchandise released with the EP includes more clothes and a poster — one sweatshirt has the phrase “phone sex is safe sex” written on it.

The purchase of one of the condoms also includes a digital download of the EP.

[From People via Dlisted]

She is Coming costs $5.99 on iTunes. So the condom cost is $14. For $14, I feel like I want the condom to do more for me. I can’t figure out what though. My go-to bonus is always to get my dishes done, but I can’t make that work here, unless there is a Ratatouille in the condom type situation and let’s all just admit – nobody wants that. As for the phone number, I called it and it rang once, went silent and cut off. Miley is a great advocate for many good causes, I sort of expected it to be a donation line for LGBTQ rights or Planned Parenthood or something. At the very least, I expected a pre-taped message. It feels like she missed a fun opportunity there and that’s not normally like her. As mentioned, there are a variety of sex themed/double entendre items you can purchase on Miley’s website. Most of it I could leave (although I think this orange t-shirt is pretty cool). But it’s fine and very on brand for Miley. A lot of her promos had her devouring fruit in such a manner that was supposed to be seductive, but really it just made we want to get her a napkin. I’m glad that is less prominent in the merchandise.

As far as her other promotion is going, her husband, Liam Hemsworth, is posting a bunch of arty shots of Miley on his Instagram, which is great, he should be supporting his wife’s career. But the shots, which actually aren’t bad, are even better with his tongue-in-cheek captions, mainly about how impressive he is for taking them:

Girls got talent. She might just make it…WOW to the awesome dude (me) for taking such an incredible photo. #husbandgoals 😉

Girls got talent. She might just make it…WOW to the awesome dude (me) for taking such an incredible photo. #husbandgoals

After I wrote this post, I saw this terrible story out of Spain. Miley was grabbed and groped/kissed by a ‘fan’ as she walked directly behind her husband, who took her under her arm the minute he knew. The person’s actions in this video are not acceptable. This is never acceptable. I hope Miley is okay.

11 naked wedding cakes to fall in love with
Entertainment