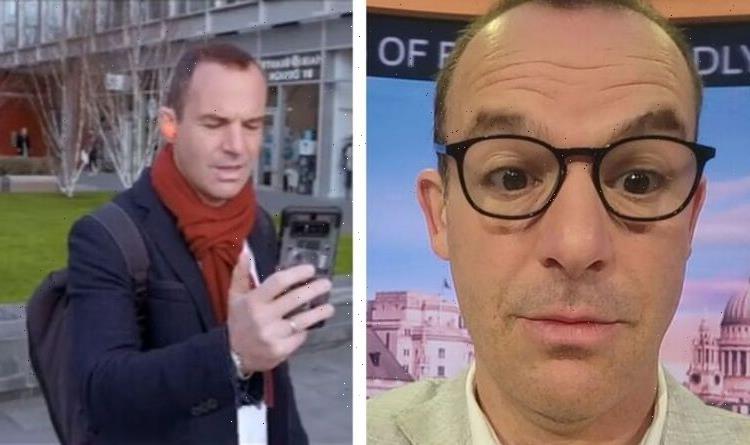 Money saving expert Martin Lewis issued a stark warning to energy consumers to provide their meter readings to firms urgently, before planned price hikes took effect. However, in a scathing tweet of their own, E.ON blamed Martin for panicking customers, causing “unprecedented demand” and ultimately “bringing down Britain”.

Yet the consumer rights campaigner laughed off his newfound infamy, suggesting that the firm had merely used his name with the digital equivalent of a “wry smile”.

He had originally urged the nation to share his tweet of warning, noting that “Thurs 31 Mar is energy #MeterReadingDay”.

He then offered some precautionary advice to consumers “so firms can’t assign some of your current usage to April when rates are c54% higher”.

He suggested: “Not smart meter? Send a reading (later in the day the better) – Smart or prepay meter? Just take a meter pic for safety (in case of dispute).”

He called for the regulator to investigate the issue, pointing out: “I’m getting many many reports of people struggling to submit meter readings.

Finally he added: “It’s not good enough @ofgem please can you look into this.”

Some energy users who tried to submit their readings received an error message after logging into the site telling them that due to unexpected demand, they might experience difficulties accessing their account.

There were cases of some logging in multiple times in succession in a bid to resolve the lock-out situation.

@eon_next then responded to a customer complaint with a tweet that directly implicated Martin in causing the chaos.

“Unfortunately the website and phone lines of every supplier are being hammered today,” the firm wrote.

“Martin has once again created unprecedented demand bringing down Britain.

“If you respond to our private message providing the details requested then we can assist you.”

“Meter readings taken today can be added to your account online in the coming days.

“We apologise for any inconvenience. Smart meter customers don’t need to send readings as they’ll be sent automatically.”

“On the Eon tweet – I think it was someone trying to be funny – who forgot that you can’t do a wry smile in twitter,” he joked.

“Rather than anyone actually suggesting I’m “breaking Britain’ I’m always forgiving of human error (as I make ’em myself).

The firm later deleted the tweet that name-checked him.