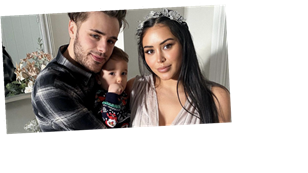 Marnie Simpson has sparked speculation that she and fiancé Casey Johnson have split after after three years together.

The former Geordie Shore star, 28, has shared a series of cryptic quotes on her Instagram, which has sparked concern for her romance amongst fans.

Marnie, who recently said she went into a “really dark place” after suffering with her chronic bladder condition, posted an image of a pink and purple sky on her Instagram page.

On top of the image were the words: “To new beginnings”. And, as she shared the quote with her four million followers, she hinted she and baby son Rox would be moving home as she added emojis of two people followed by a house in the caption.

Puzzled fans quickly picked up on the cryptic hint in the comments as one said: “2 days ago casey posted a pic of her saying my amazing wife to be…”

As another said: “According to her stories she said she “can’t believe she’s doing it by herself.” Sending good vibes”.

While another picked up on the fact that Marnie and Casey are not following one another on Instagram as they said: “Wait , why is it just [girl emoji] [boy emoji] ??? They not following each other ……”

Marnie continued to share more cryptic quotes on her Instagram stories, including one which read: “If life can remove someone you never thought of losing, it can replace with someone you never dreamt of having”.

Another thought-provoking quote posted on her Instagram story read: “One day you will tell your story of how you overcame what you went through and it will be someone else’s survival guide.”

Meanwhile, the pair appear to have removed one another's names from their Instagram bios.

Former Geordie Shore beauty Marnie, who recently said her body has never been the same since giving birth, shares one year old son Rox with The X Factor star Casey, 25.

The couple became engaged after an incredibly romantic proposal from Casey in August last year.

Marnie announced the news on Instagram as she shared a snap of herself flashing her gorgeous diamond engagement ring from Casey.

Casey can be seen pulling an excited expression as he points at Marnie, who is holding up her left hand with the sparkler on it.

She captioned the image: “And just like that I’m now a finance, and I’m marrying the man of my dreams, how did I get so lucky @caseycodyj.” [sic]

Meanwhile, Casey shared the same picture on his own page and wrote: “OMG SHE SAID YES!!!”, along with a ring emoji.

The couple began dating in 2017 after they met while filming dating series Single AF and confirmed their romance as they locked lips in front of the Eiffel Tower in Paris, France, where they were filming the dating show.