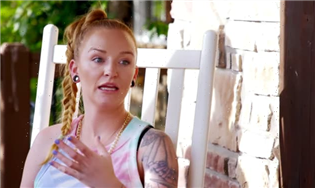 Maci Bookout has long been a divisive figure among Teen Mom OG fans.

Some praise Maci for her toughness and devotion to her children’s happiness.

Others argue that she’s all bark and no bite, pointing out that for all her talk of being a badass, Maci has never worked a real job, spends an awful lot of time sitting around at home, and tapped out of Naked and Afraid faster than just about any contestant in the show’s history.

Maci has been under fire a lot in recent weeks, largely because of the messiness she’s been showcasing on social media.

Bookout’s paid clickbait campaigns are often downright shameless, as the star seems to have no problem spreading false information about her co-stars and cashing in on tragedies like the murder of Gabby Petito.

Maci has also taken to lashing out at fans in the face of criticism, and she really went off this week in the face of claims that she’s using her medical issues as an excuse to adopt a sloth-like lifestyle, a la Amber Portwood.

On Tuesday’s episode of Teen Mom OG, Maci’s husband, Taylor McKinney, told producers that Maci would be unable to participate in that day’s filming due to a flare-up of polycystic ovarian syndrome (PCOS).

As The Ashley’s Reality Roundup reports, several Twitter users were highly critical of Maci, accusing her of exaggerating her condition in order to shirk her job responsibilities.

“But I still get up everyday, put on my big girl panties and handle my shit. Homeschool my kids, house work and run my own business. Stop using it as an excuse.”

“I still do all of that… every single day. I needed to rest for an hour instead of filming B roll,” Maci replied, referring to one of the tasks expcted of the show’s stars.

“I do house work, run my businesses, pick my kids up & get them to their extra curricular activities, make dinner etc. What I do NOT do, is criticize anyone suffering from PCOS!” she added.

Another user echoed the insult, telling Maci “it’s literally your job to film” and accusing the mom of three of “blaming everything on PCOS.”

Again, Maci replied by arguing that she performs many necessary tasks every day in spite of her health issues.

“I have many jobs & yes filming is one of them,” she said.

“I complete all of them every day. Do u know what B roll (I mentioned above) is? Pretty sure they filmed me in my bed resting. That’s completing a job. Also-curious to hear what I blame PCOS for, besides the actual symptoms?” she continued.

Maci concluded by lashing out at the “ignorance” of the commenter, who also suffers from PCOS.

“The fact that you said you have PCOS, then went on to say PCOS is ‘really not that serious’ kind of shows me that responding to your ignorant comments is a waste of my time,” Maci wrote.

“I wish you nothing but the best and hope your pcos journey continues to be as smooth as possible.”

Bookout is a victim of the phenomenon in which reality TV viewers think that they know every aspect of the stars’ lives.

As much as the shows might be designed to make us feel this way, it’s rarely accurate.

And Maci has every right to point out when fans have arrived at an inaccurate conclusion based on irresponsible portrayals by the media.

Of course, shortly after arguing with viewers about her protrayal on this week’s episode, Maci posted more misleading clickbait, this time about Kailyn Lowry’s ex-husband, Javi Marroquin.

If she asked Javi’s permission first then maybe the situation is more ethical than it seems.

If not, Maci might want to put a little more effort into practicing what she preaches.