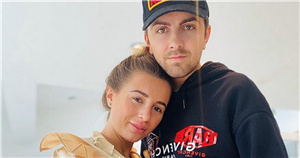 Dani Dyer has split from her boyfriend Sammy Kimmence after he was sentenced to over three years in jail, it has been reported.

The 24 year old Love Island winner is said to be "distraught" by Sammy's sentencing after he "lied to her about his crimes" before being sent to prison.

Sammy, 25, was sentenced to 42 months imprisonment on Wednesday at Portsmouth Crown Court, where the court heard how his actions left an RAF veteran "living on the breadline".

A source has now told MailOnline: "She is absolutely floored by what's happened with Sammy. She knows she has to make massive changes in her life and she's so distraught.

Get exclusive Love Island stories and fabulous updates straight to your inbox with OK!'s daily Factor 50 newsletter. You can sign up at the top of the page.

"All she knows is that her baby boy Santiago is the only thing that matters now and she is trying to work out how best to look after him as a single parent."

The insider continued: "She needs time to think it through. Sammy completely downplayed the court case every step of the way.

"He led her to believe he hadn't done anything too serious and that he would get a suspended sentence now she knows the full horror of the crime. "She is broken. She feels desperately sorry for the two men he scammed and whose lives he ruined.

"She feels utterly stupid for ever believing him and she is totally overwhelmed.

"The little dream family she thought she had has been smashed apart and she is now trying to work out how best to pick up the pieces."

Portsmouth Crown Court heard on Wednesday how Sammy's victims were legitimate clients of an investment company where he used to work, with him taking them on when the business stopped operating.

It was then that he falsely claimed to Peter Martin, 90, and Peter Haynes, 80, that he was authorised to provide financial services through his company S&S Trading Ltd, taking £33,919.

Kimmence pleaded guilty to five counts of fraud back in April, where the judge warned him that his offences were serious enough to cross the custody threshold and land him a prison sentence.

Four of those counts against Martin, 91, racked up to nearly £26,000. Martin has since passed away.

The fifth count totalled £7,927 against Peter Haynes, who has Alzheimer’s.

Mr Haynes said of the matter: "In one go, all the savings that I accrued over my working life were wiped out. My bank account shows zero."

For the latest on Dani and other Love Island stars, make sure you're signed up to OK!'s daily newsletter.

Hallmark, take a hike! What did the riddle in a miner’s obituary mean?