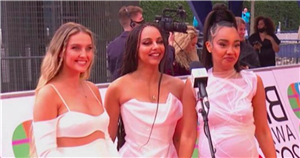 Little Mix's Perrie Edwards and Leigh-Anne Pinnock cradled their baby bumps as they stepped out for the star-studded annual Brit Awards at The O2 in London on Tuesday night.

After announcing they were both expecting their first child with their partners, the pregnant pals indeed sported a glow as they attended the star-studded event with bandmate Jade Thirlwall.

Perrie wore a gorgeous silk white crop top and flowing skirt as she debuted her baby bump just days after her announcement.

While Leigh-Anne wore a stunning high-neck gown to the star-studded bash.

Little Mix, who are nominated for Best British Group, delighted fans as they posed as a group on the red carpet at the event.

Their red carpet appearance comes just a day after Perrie announced she was expecting her first child with footballer Alex Oxlade-Chamberlain.

The blonde bombshell revealed her news via a series of arty photos with her other half shared on her Instagram page on Monday.

Perrie captioned the photos: "So happy to be on this wild journey with my soulmate. Me + Him = You. We can't wait to meet you baby Ox!"

Days earlier, Leigh-Anne revealed she was pregnant and expecting a child with Andre Gray.

Announcing the news in a stunning social media post with Andre, 29, she wrote: "We've dreamed about this moment for so long and we can't believe the dream is finally coming true… we can't wait to meet you."

Perrie and Leigh-Anne have since shown off their blossoming baby bumps alongside their manager Samantha Cox, who is also pregnant, in a new snap.

Little Mix is nominated for Best British group due to their work on their latest album Confetti, which also features their former bandmate Jesy Nelson who left the band five months ago.

The X Factor winners have been nominated for British Group twice before but have never won.

If they are to pick up the gong on Tuesday night, they will be the first girl group to achieve the feat in BRITs history.

They have been nominated for 10 Brit Awards during their decade long career.

They won their first of the prestigious awards in 2017 when they picked up British Single for Shout Out To My Ex, and their second in 2019 when they were awarded British Artist Video for Woman Like Me.