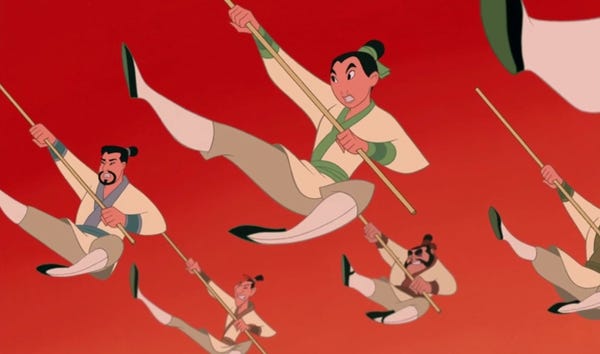 Disney's live-action "Mulan" does away with most of the popular songs from the animated movie, minus a few nods here and there.

For any fans who were hoping to hear a version of "I'll Make a Man Out of You" in the new film, you're now in luck.

An updated recording of the song was pitched for the end credits of the live-action movie. When Disney passed on it, the composer and lyricist of the original animated movie decided to finish making the song anyway and release it independently of the studio.

The single is out now on streaming services, including Apple Music, Google Play, and Spotify.

"I just thought, wouldn't it be fun to do a women's empowerment version of 'I'll Make a Man Out of You'?'" lyricist David Zippel told Insider.

Zippel wrote the lyrics for the music in Disney's 1998 "Mulan." Both he and "Mulan" composer Matthew Wilder were brought back for the live-action movie to try and find a way to work some of the original music naturally into the 2020 film.

"We were really excited about it and we pitched it and I think that the music people at Disney share our enthusiasm, but, ultimately, it doesn't really fit the tone of the picture," Zippel said of pitching a new "I'll Make a Man Out of You" for the new film, which is more grounded in action. "That was their decision. After seeing the picture, I understand that completely."

The two knew how popular the song was and how much it meant to fans so they decided to complete it and release it as a tribute to the new film.

Disney gave its blessing for the song to be released

"We went to great lengths to run it up the flag pole," Wilder said. "We're all friendly with the people over there and [president of music and soundtracks for The Walt Disney Studios] Mitchell Lieb was very sympathetic."

"He loved the piece and went to bat for us when word came down from on high that they didn't want to use it for the film," Wilder added.

Zippel said Disney told them they could do it regardless because anyone can create a cover version of a song. Their version of "I'll Make a Man Out of You" is released independently.

"But we didn't want to make them angry. We want to support them," Zippel said. "They said, it's OK. So we're glad to have their blessing because we really didn't want to go to war with our friends and our movie."

Wilder and Zippel wanted to keep the spirit of the original song but update it with more of a woman's point of view. So you'll notice a few lyric changes.

For instance, it didn't make sense to mention the Huns, the villains of the animated movie.

Nayana Holley, Toni Scruggs, and Kara Britz sing the new version of the song. Scruggs recently worked with Wilder on an animated short, "The Pig on the Hill."

"We were thrilled with the way it turned out," Zippel said. "It was just an idea that I threw at Matt. I had no idea what he was going to do with that or how he would reinterpret it, but it's so much fun. We just thought it, let's put it out there and see if the world embraces it."

The psychological impact of the government’s coronavirus U-turns
Entertainment