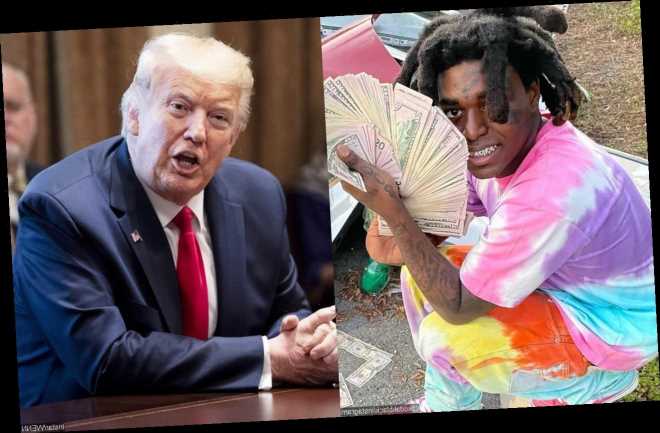 The rapper also reveals that he has created more than 200 records that he started working on since his release, explaining, ‘It’s just me taking my time, you know … setting my future up.’

AceShowbiz –Kodak Black is forever grateful for Donald Trump after the latter granted him clemency earlier this year. During his interview with TMZ, the 23-year-old rapper sang the former president praises, calling him the “real one.”

“I’m a real one, Trump a real one,” Kodak said in the virtual interview. He also showed off an autographed MAGA hat he got from Donald after his release. The “Wake Up in the Sky” spitter then shared what he and Donald shared in common, saying, “We geminis. His birthday’s two days after mine.”

That aside, Kodak also revealed to the news outlet that he had created more than 200 records that he started working on since his release. “The music is easy. It’s just me taking my time, you know … setting my future up and not going back to prison or jail, none of that type of stuff,” Kodak explained. “Y’all tell Justin Bieber I have a song for him … I got a song I need [Beyonce Knowles] on … I just need her to do two bars and I got the rest.”

The revelation arrived after his music engineer Derek “Dyryk” Garcia claimed last week that the rapper had recorded about 167 songs within two months.

Kodak was sentenced to 46 months in Kentucky’s United States Penitentiary Big Sandy after pleading guilty to unlawful possession of marijuana and criminal possession of a firearm. He was released on January 20 alongside fellow incarcerated rapper Lil Wayne after they received a pardon from Donald on the latter’s final full day as POTUS.

To celebrate him being a free man, Kodak, who is also known as Bill Kahan Kapri, got some icy new accessories. Celebrity jeweler Johnny Dang shared on his Instagram a clip of him posing with the rapper. “Welcome home, @kodakblack good to zee you home man and work with you. We do too many crazy new 1 of 1 pieces tonight,” so he wrote.