The reality star took to her Instagram Stories this week, revealing a sweet throwback card from the early 1990s. The card featured Khloe, along with sisters Kim and Kourtney and brother Rob, all posing around their late father, Robert Kardashian. After sharing the pic, an account reposted it, calling out the misspelling of Khloe’s name.

“Wait!! @90sanxiety just pointed out the typo in my name!!! So rude!” Khloe joked. “The disrespect of it all lol.” 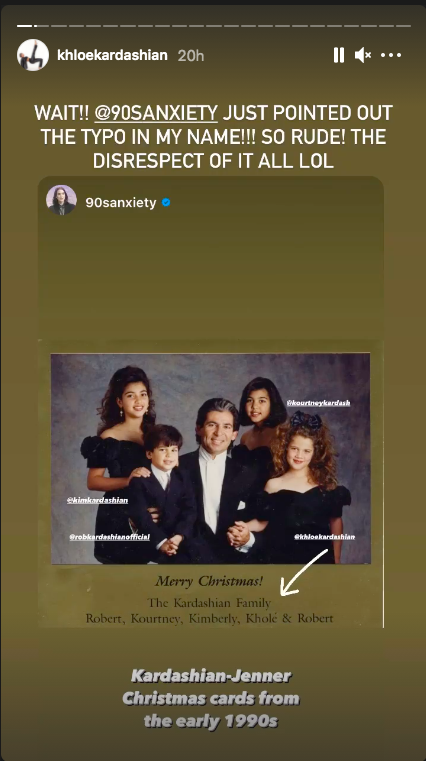 The funny post comes just one week after ET learned during Disney’s Investor Day that the Kardashian-Jenners are on the move with reality TV.

Three months after announcing the end of their signature program, E!’s Keeping Up With the Kardashians, the famous family has signed on to a new exclusive deal with Disney to star and executive produce a new reality series for Hulu in the U.S. and Star everywhere else. Not much is known about the project just yet, but the new series is expected to debut in late 2021.

As for Khloe, she’s also been busy keeping up with Tristan Thompson’s big move. After nine years with the Cleveland Cavaliers, the NBA star recently signed a deal with the Boston Celtics, which requires him to relocate. Khloe and Tristan share one child together, 2-year-old daughter True.

“Tristan in Boston is a difficult pill to swallow for Khloe especially since she and Tristan have been doing so much better as a couple and as a family lately,” a source tells ET of the pair, who romantically reconciled this past summer after more than a year apart. “Khloe is especially going through it, but is doing her best to keep her head up and stay positive.”

“She’s not excited for the move for her family’s sake, but she is for Tristan and his career,” adds the source. “At this point they’re planning to split their time between L.A. and Boston, but it’s still up in the air and there’s no definite answer since they are still working on rebuilding their relationship and trust.”

Hear more in the video below.