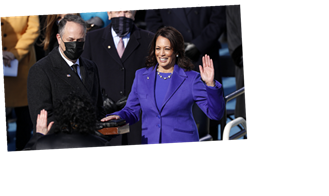 Kamala Harris has been sworn in as the Vice President of the United States, making history as the first female to hold national elected office, as well as the first Black and Asian-American vice president.

Supreme Court Justice Sonia Sotomayor — the first Latina appointed to the United States’ highest court — administered the oath of office for Harris. With her hand on the Bible held by her husband, Doug Emhoff, Harris swore to “support and defend the Constitution of the United States against all enemies, foreign and domestic.”

Following her swearing-in, Harris watched as her running mate, Joe Biden, took the oath of office from Chief Justice John Roberts and officially became the 46th president of the United States.

The unique inauguration ceremony — which took place amid a national pandemic that has now claimed over 400,000 lives and just two weeks after violent insurrectionists stormed the United States Capitol building in defiance of the presidential election results — had few attendees in person. The National Mall was instead filled with thousands of small flags, representing Americans who might otherwise have been in attendance, while thousands of National Guard troops stood watch over downtown Washington DC.

Three former presidents — Barack Obama, George W. Bush and Bill Clinton — were among those in attendance, however outgoing President Donald Trump flouted tradition in declining to attend, instead departing the White House for the last time on Wednesday morning.

A day before their inauguration, Harris reflected on her time campaigning with Biden and the progress they hope to shape moving forward.

“When @JoeBiden asked me to join him as his Vice President, saying yes was an easy decision,” she wrote on Instagram. “While I first knew Joe as Vice President, I really got to know him as the father who loved my dear friend, the late Delaware Attorney General Beau Biden. As attorneys general during the financial crisis, Beau and I were leaders in the fight to take on our nation’s biggest banks and secure billions of dollars in relief for homeowners across our country. And I can tell you that Beau inherited his strength of character and commitment to public service from his father.”

“Joe and I come from different backgrounds—but we were raised with the same values: Hard work. Honesty. Decency. A belief that we all have a responsibility to look out for one another,” Harris continued. “That’s how Joe and I will lead. We’ll confront the daily challenges facing working people with the same determination and steady leadership applied to addressing the most serious crises facing our nation. And starting tomorrow, we’ll work to unify our country, tackle the challenges facing our nation, and renew the promise of America.”

Michelle Obama Shares a Message of Hope and Relief on Inauguration Day: "Today Is the Day"
Entertainment