Julianna Margulies’ Trump nightmares had her waking up ‘screaming,’ she tells Colbert

Fox News Flash top headlines for May 21 are here. Check out what’s clicking on Foxnews.com

The way actress Julianna Margulies tells her story, she’s probably lucky she didn’t wind up in an ER.

The former “ER” star told “Late Show” host Stephen Colbert on Monday night that for a while she would wake up “screaming” from nightmares after Donald Trump won the presidency in 2016.

Margulies recalled one dream in particular, according to the Washington Examiner.

“I was in a boardroom, there was a long table, and it was just a guy who's in the Oval Office right now, sitting there and I walked in and I [was] screaming, screaming. … I mean I was going crazy and screaming," she said.

She soon decided to stop following the news, in hopes her Trump nightmares would end, she said, according to the Examiner.

Eventually, however, the star of "The Good Wife" said she resumed getting her news from the New York Times, NPR and “PBS NewsHour,” she said, according to the Washington Times. 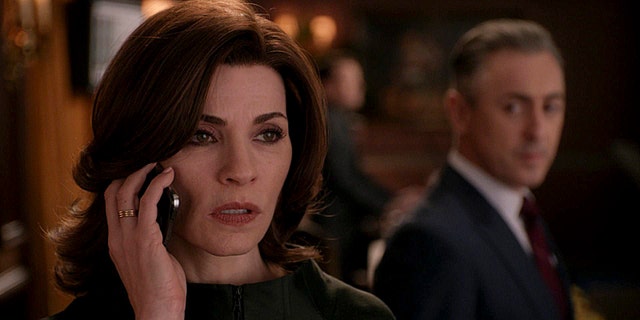 Julianna Margulies as Alicia Florrick on "The Good Wife."
(CBS)

Separately, Margulies told EW Radio and Sirius XM's Jessica Shaw that she turned down a CBS offer to appear on "The Good Fight," a CBS All Access spinoff of "The Good Wife," because she wouldn't be paid at the same rate that she earned on "The Good Wife."

She added that she used to conceal from the media the real reason why she declined the offer, but not anymore, EW.com reported.

“I thought, Why am I protecting CBS? I said yes. They said no," she said. "And you know what? I need to pave the way for the next one coming up. … I also know for a fact that any male star who is asked to come on a spin-off of their show would’ve been offered at least $500,000. … I’m not angry, I just needed to speak my truth. … If they were to ask me to go back on 'The Good Fight,' paying me what my salary is, [I would be there] in a heartbeat.”

Mandy Moore Kicks Off Her Quest to Hike Mount Everest