Jordyn Woods and boyfriend Karl-Anthony Towns prove the couple that twins together, stays together on a hot date night out in Malibu.

Jordyn Woods is making us green with envy! On a cute date night out with Minnesota Timberwolves center, Karl-Anthony Towns, Jordyn and her man twinned to perfection in green outfits dripping with designer labels. The couple was spotted arriving at Nobu in Malibu Saturday night on September 11 and Jordyn looked oh-so-comfortable in her new furry shamrock green Bottega Veneta slippers, along with a matching Hermes Birkin bag and crop top. Meanwhile, Karl-Anthony sported a similarly shaded Louis Vuitton varsity jacket and AF1 Nikes. 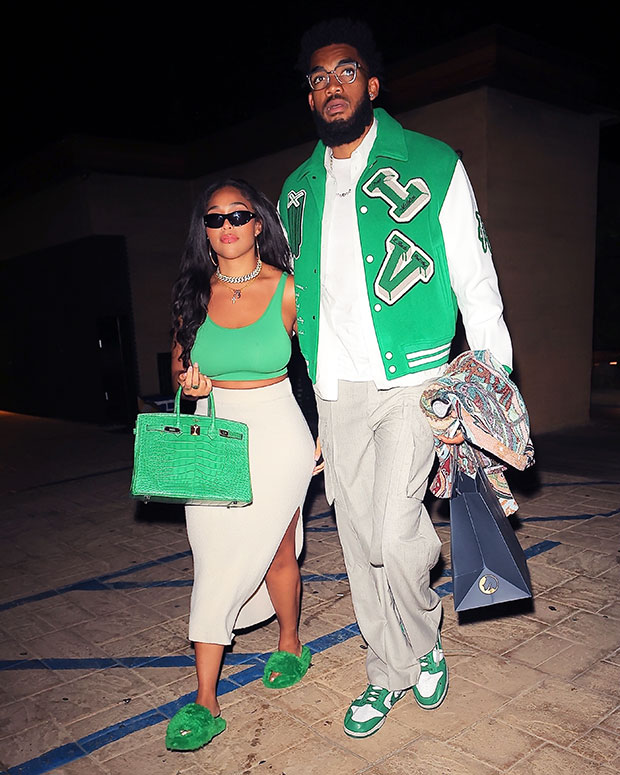 It’s just the kind of adorable action we’d expect to see from Jordyn and the 25-year old pro-basketball player. The dynamic duo have been dating for over a year and have certainly been through a lot together. After the newly minted fitness queen posted a before-and-after photo of her weight loss journey on September 8 and received a slew of criticism from fans who questioned her dramatic progress, Jordyn’s knight-in-shining armor came to her defense. “Are we saying that women can’t work hard and transform their bodies?? I’ve SEEN the hard work and I’ve seen the results and trust me, this is all natural,” the star athlete said in a lengthy Twitter thread.

But Jordyn is not one to let the negativity of social media get her down. The young entrepreneur responded to the backlash with an Instagram story explaining that exercise “saved” her after struggling for years with her weight and mental health. All this come on the heels of Jordyn officially launching her new fitness app, FRSTPLACE, on September 7.

Jordyn isn’t the only reality TV star that’s made headlines recently. The Life of Kylie alum has been mum so far on her former best friend’s latest pregnancy (and basically most news involving the Kardashian-Jenner clan). Kylie Jenner revealed to the world on September 7 through a video posted to her Instagram stories that she was expecting her second child with rapper Travis Scott. Whether or not it’s a coincidence that Kylie posted the baby bump news on the same day as Jordyn’s FRSTPLACE app launch remains to be seen, but the two have seemingly not had any interaction since sometime after the infamous Khloe Kardashian/Tristan Thompson cheating scandal that involved Woods two years ago in 2019. Kylie revealed in the Keeping Up With the Kardashians reunion special that aired on E! that she and Jordyn did have a talk about where their friendship stands following the blow-up that ended their relationship. Khloe said in the reunion special that she would “genuinely not care” if Jordyn and Kylie ever rekindled their friendship.