Home » Celebrities » Joe Jonas’ Parents Found Out About His Vegas Wedding From ‘The Internet’! Plus, Bachelor Par Joe Jonas’ Parents Found Out About His Vegas Wedding From ‘The Internet’! Plus, Bachelor Par

Fans weren’t the only ones shocked when Joe Jonas and Sophie Turner tied the knot in a surprise Las Vegas wedding on May 1 — the pop-rocker’s parents were, too!

During an appearance on Friday’s The Graham Norton Show, the 29-year-old artist revealed that his parents, Paul and Denise, found out about his nuptials the same way you did: from the internet!

While discussing Joe’s “quickie” wedding, Graham asked the Sucker singer if his parents are privy to the fact that he’s now a married man, to which he replied:

“They do, the internet told them! I’m still trying to make it better!”

Wait, what? Joe invited Diplo — whom he later admitted “ruined” the ceremony by live-streaming it on Instagram — but not his mom and dad!? This really was a spur of the moment decision!

While Mr. and Mrs. Jonas may have been kept in the dark about it, the Game of Thrones star made sure to give her mom a heads up beforehand. Sophie’s mother Sally told DailyMail.com:

“Sophie did call me before. She said, ‘mum, I’m getting married in Vegas.’ …I am absolutely delighted and so is my husband Andrew.”

Hopefully, both sets of parents will be invited to the couple’s second upcoming vow ceremony, which is expected to be in France sometime before the Jonas Brothers go on their freshly-announced European tour in August.

Meanwhile, slowly but surely — and not in any particular order — Joe is managing to check off his groom-to-be(-but-already-is) laundry list. This week, he had a bachelor party in Ibiza with his closest bros; Jonas and non-Jonas alike.

Video: JoBros Return To TV After A DECADE To Perform ‘Sucker’!

Danielle Jonas‘ brother Mike Deleasa shared some photos from the boys’ trip on his Instagram Thursday, captioning a series of shots (below) featuring himself and Joe’s DNCE bandmate Cole Whittle on a yacht:

Submission for Trip Advisor… The Olive Garden is a must. 📷 @richardchai

The 30-year-old also posted a shot of himself and brother-in-law Kevin Jonas staring out at the water while on the ship (below): 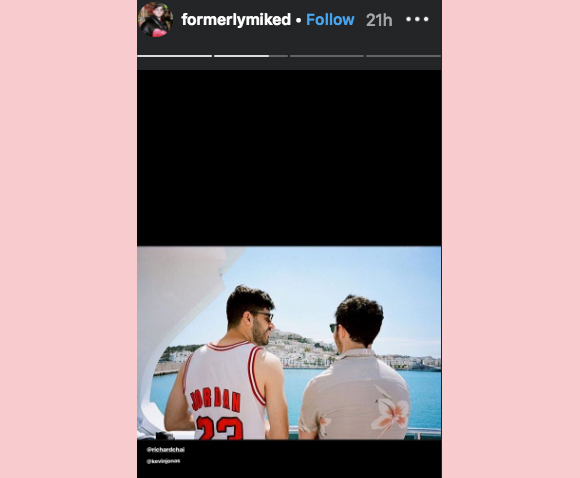 It’s unclear what exactly the celebrations earlier this week entailed, but we do know that it left the JoBros quite exhausted for their Wednesday morning interview with Capital FM. Kevin admitted to the hosts that the siblings weren’t feeling too great after their vacation, adding:

“You should have seen us yesterday.”

We’re sure this bachelor party will be one more thing their parents will learn from the internet.

Review: The Searing Power of an AIDS Symphony
Entertainment