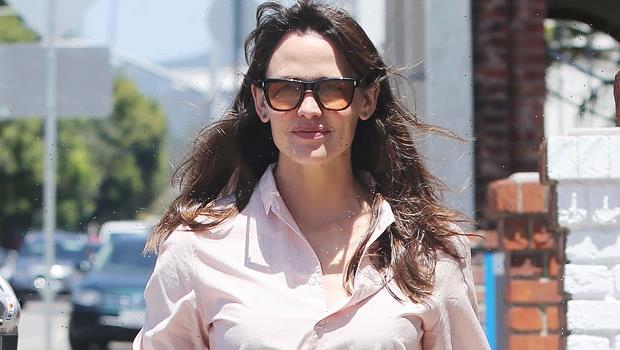 Jennifer Garner cut a casual figure in a business-inspired ensemble while walking around the Los Angeles neighborhood of Brentwood.

Jennifer Garner was seen running errands in Los Angeles on July 30 in a business casual ‘fit. The 49-year-old Yes Day actress was spotted in Brentwood while rocking a pastel pink button-down blouse and bootcut denim jeans. Jen had her iPad, AirPods, a notebook and a sizable stack of papers in her hand as she appeared to make her way to a meeting. The brunette beauty also wore black-rimmed glasses, black leather boots, and stacked bracelets, while wearing her dark tresses down in loose waves.

The 13 Going On 30 actress, who shares three kids with Ben Affleck, 48, has been keeping busy while her ex yachts around Europe with Jennifer Lopez, 52. Jen (Garner, that is) was recently seen running errands at a farmer’s market in Los Angeles, and appeared to be in high spirits as she left with an armful of groceries and bright bouquets. She cut a casual figure in an all-black ensemble, including leggings and a sweatshirt.

As fans would know, it comes amid Ben and Jen seemingly having the time of their lives in Europe! The couple, who rekindled their romance a few months ago, were  most recently spotted passionately kissing on a dock in Naples, Italy. Just a few days prior, they were photographed on a yacht in St. Tropez, sharing a kiss while Ben placed his hand on her butt. The singer even made their relationship IG official when she posted a photo of the pair smooching on her 52nd birthday.

Since jetting off to Europe, the couple — who fans know as Bennifer — have pulled out all the stops for Jen’s 52nd birthday! The “Jenny From The Block” hitmaker went all out with a glamorous party in Saint Tropez, where she spent most of the evening cuddled up to Ben as they sung along to her old songs — including several from the early 2000s when they were first romantically involved.  “J.Lo celebrated with close friends. She was in the best mood and happiest she has been in a long time,” a source told HollywoodLife EXCLUSIVELY last week. Ben surprise his girlfriend with a gorgeous custom-designed necklace from Foundrae to mark the occasion