Jennifer Garner was all smiles while picking up a bouquet of fresh flowers, amid her ex Ben Affleck’s European getaway with Jennifer Lopez.

Jennifer Garner stepped out for a flower run in Los Angeles on July 25. The 49-year-old Yes Day actress was spotted running errands at the farmer’s market, and appeared to be in high spirits as she left with an armful of groceries and bright bouquets. She cut a casual figure in an all-black ensemble, including leggings and a sweatshirt. The brunette beauty also wore black-rimmed glasses and a white protective face mask. 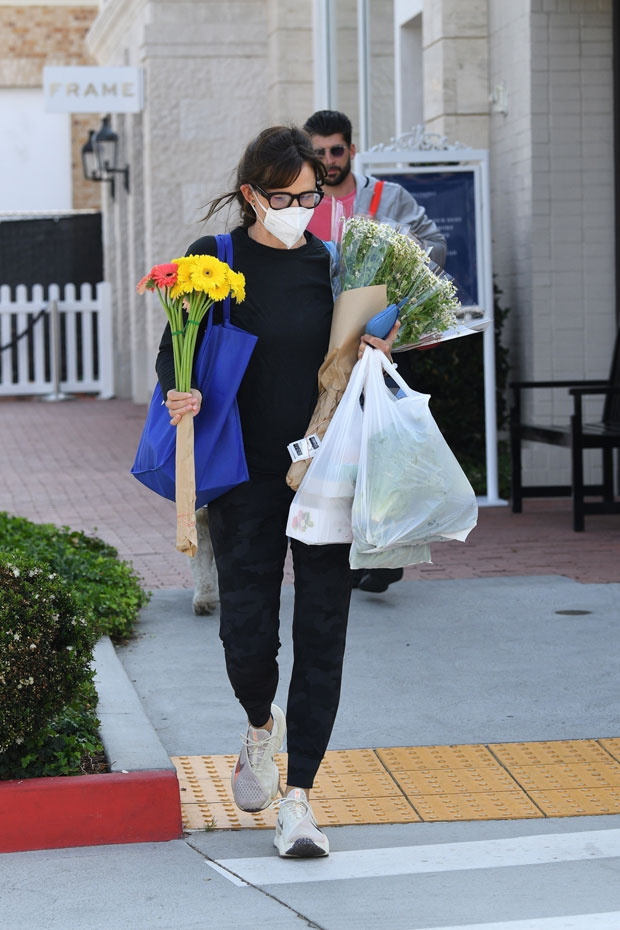 As fans would know, her ex Ben Affleck, 48, has been yachting on the French Riviera with Jennifer Lopez, 52, in celebration of her birthday. On the same day Jennifer (Garner, that is) was seen running errands in L.A., Ben was photographed grabbing J.Lo’s backside on a yacht in St. Tropez.

The singer rocked an orange string bikini, while Ben cut a casual figure in a grey tee and shorts. After touching her backside, Jen then leaned up and planted a kiss on her new beau. The snaps were reminiscent of a scene from J.Lo’s iconic 2002 “Jenny From The Block” music video, which showed her rocking a bright pink bikini while lounging on a boat.

These snaps come one day after the couple, who rekindled their romance a few months ago, made things IG official with a PDA pic. In celebration of her 52nd birthday on July 24, the This Is Me…Then singer shared a series of bikini snaps, including one where she passionately kisses Ben! The Oscar winner leaned in to place a big birthday smooch on Jen, practically breaking the internet.

HollywoodLife previously reported that Jen had plans to spend her birthday with those closest to her — including Ben, who she was engaged to from 2002 – 2004. “Jen is going to keep her birthday very chill. She is looking to be with family and Ben, have a great meal and just take the day to relax since the rest of her year is usually devoted to work,” the insider told HL. “They are looking to travel a little more and they will celebrate both their big days as the summer continues. Jen also isn’t expecting any lavish gifts, she just wants to be as low key as possible,” the source also told us.