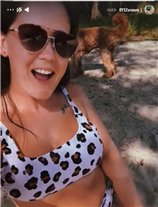 We rarely say this about Jenelle Evans.

In fact, we pretty much never, ever say this about Jenelle Evans.

And yet, here goes…

The former Teen Mom 2 cast member seems like an irresponsible mother and also like someone who has continually enabled a wife-beating animal-killer.

We disapprove of basically every decision Evans has ever made.

Earlier this week, Jenelle shared a handful of new bikini photos, doing so in response to constant criticism about her weight and her figure.

The mother of three uploaded these snapshots and also previously recorded a TikTok video of a follower saying the following in judgment:

“I love Jenelle so much! She was always my favorite, but I’m sorry, but ain’t no way she’s a size 6.”

In response, Evans posted footage of herself dancing in jeans while showed off her size tag, which, indeed, confirmed they were a size six.

Jenelle’s video concluded with her giving this troll the middle finger.

Evans, sadly, has frequently been forced to deal with body-shaming losers.

In August, some total stranger left a comment on a separate video of Jenelle’s, writing of the polarizing ex-MTV personality:

“She drinks constantly… it’s what has caused her to go from a size 5 to a size 14! She got fat and not phat.”

And the thing is, look… there are so many reasons you can/should trash Jenelle Evans.

She has stayed with a husband, David Eason, who almost definitely broke her collarbone a few years ago in a drunken rage.

She has also stayed with a husband who admitted to shooting and killing her family’s dog.

She has also stayed with a husband who openly hates gay people and Black people, setting an awful example for her kids in the process and placing them in danger every second they share a roof with Eason.

By all means, attack Jenelle for all that stuff.

But can we try not to criticize people for their appearances?

It’s unnecessarily cruel and it doesn’t take into consideration various reasons why someone (stress, a medical condition, etc.) may have packed on a few pounds.

“You guys make it look easy to make you look dumb,” she said after clapping back against the whole Size 6 thing, adding:

“Damn you sure think you know every detail of my body. #MomBod. #MomBodSummer.

While more recently flaunting her body in a two-piece, Evans even acknowledged the efforts she’s making to improve herself.

Both physically and mentally.

“Eating healthier lately! Cut out a lot of fast food, soda, and bread,” she told followers.

“I haven’t been trying, but I am losing weight without working out! Feeling great lately.

“Focusing more on my mental health and body has been more than amazing and very rewarding in my opinion.”