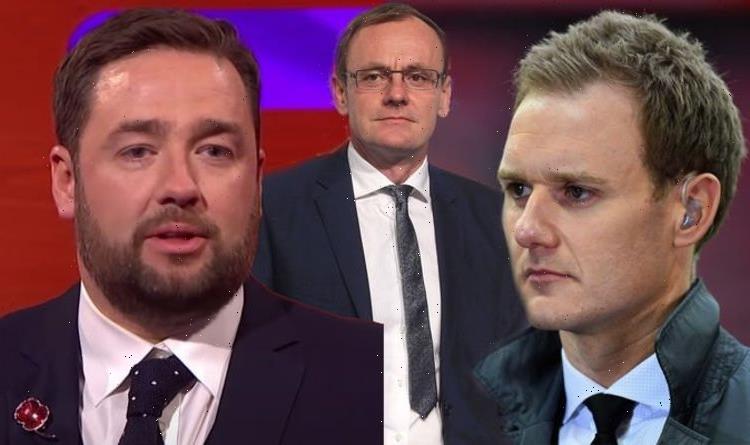 I think most people took it the way you intended it and thought ‘that’s nice’ and left it at that.

Following the news of his death, Sean’s 8 Out Of 10 co-star Jason Manford, 40, took to social media to share a touching tribute.

The Salford-born entertainer explained that he was “absolutely gutted” and “heartbroken” for Sean’s wife and three children.

Sean and Jason starred alongside one another on the popular Channel 4 panel show between 2007 and 2010.

However, some have since hit out at Jason’s decision to share a screenshot of the text message, in which he sent Sean his best wishes.

The 43-year-old penned: “@JasonManford Hi Jason. I think most people took it the way you intended it and thought ‘that’s nice’ and left it at that.”

Many fans also flocked to the replies section to echo the support.

“I thought it was an important tweet especially after the last year and half we have had,” (sic) tweeted one.

While a second added: “I fully agree, I mean it’s not like the whole conversation was put up, just his message to a friend checking in on him and his family. Some people just like to make out that someone has to have an ulterior motive for doing anything these days.”

“What Dan said. Remember him whichever way you want, not how others think you should,” wrote a third.

Before a fourth typed: “If you had put just the tweet and not the message, you may have been accused of lying! I read your tweet/message and thought how lovely it must have been to receive it. Like Dan, I read it as it was intended. You have lost a friend.”

Alongside Jason’s screenshot, which has since been deleted, he wrote: “I texted him couple of weeks ago and I’m now so glad I did. If you’ve a friend who’ve you not spoken to for a while, drop them a message and check in. It could be the last time. RIP Sean.”

His text message to Sean, dated July 28 read: “Hi Sean, hope you and your family are doing okay.

“Did Countdown last week and missed having you there. I often think back to my days on Cats with you & how much I appreciated working with you, the buzz I’d get on the rare occasion something I said would make you laugh.”

He went on to write: “Anyway, just wanted to check in and wish you and your family all the best. Lots of love and hopefully see you soon. Jason.”

Moments before sharing his text, Jason tweeted: “I’m absolutely gutted about this.”

He continued: “So heartbroken for his wife and children. One of the funniest men I’ve ever worked with and I used to adore occasionally making him laugh on my first proper telly job, 8 Out Of 10 Cats. RIP mate xx.”

Confirming Sean’s death, a spokesperson from Off The Kerb Productions issued a statement saying: “It is with great sadness that we have to announce the death of Sean Lock.

“He died at home from cancer, surrounded by his family.”

They added: “Sean will be sorely missed by all that knew him. We kindly request that the privacy of his family and children is respected at this difficult time.”