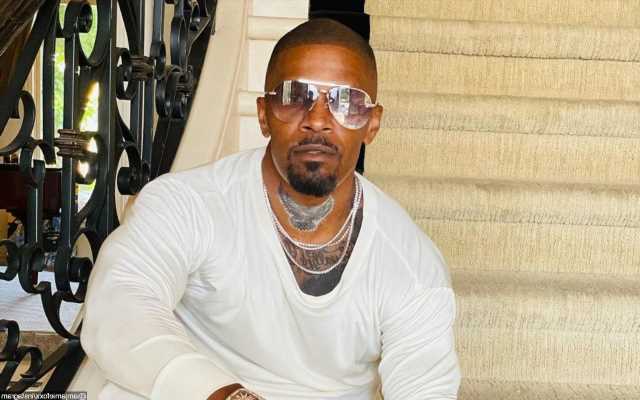 AceShowbiz –Jamie Foxx may have found himself a new love. The “Django Unchained” actor, who was believed to be single since splitting from longtime girlfriend Katie Holmes, was caught on camera holding hands with a mystery woman during a night out.

On Monday, September 27, the 53-year-old A-lister was captured escorting the mystery lady into a West Hollywood nightclub called Poppy. As the pair walked into the venue, they were accompanied by some female friends.

For the outing, Jamie kept it casual in an orange, cream and beige fleece jacket, beige pants, sneakers and a black face mask. His rumored girlfriend, in the meantime, rocked a mustard dress that she paired with high heels.

Jamie’s latest public relationship was with Katie Holmes, whom he dated from 2013 to August 2019. Though they never officially confirmed their romance, they were last spotted together at the 2019 Met Gala.

About Jamie and Katie’s split, a source told PEOPLE, “This industry is very tough on relationships.” The source then added, “Jamie thinks Katie is an incredible human being. They had a very, very deep connection. They brought each other a lot of joy and laughter.”

Following the breakup, Katie moved on with chef Emilio Vitolo Jr. They first sparked romance rumors in September 2020. However, they called it quits just after eight months of dating. “The pair have parted ways amicably but remain friends,” a representative for the ex-wife of Tom Cruise told Us Weekly in May.

While her rep did not offer further details, a source confirmed there was no bad blood between the two. “Their relationship fizzled,” the source stated. “They figured out they’re better off as friends. There’s no drama that went down with the breakup and in fact, they’re still friends.”

“Katie and Emilio really enjoyed their time together – it just simply didn’t work out,” the insider further claimed. “She’s focusing on being a mom and her upcoming projects.”