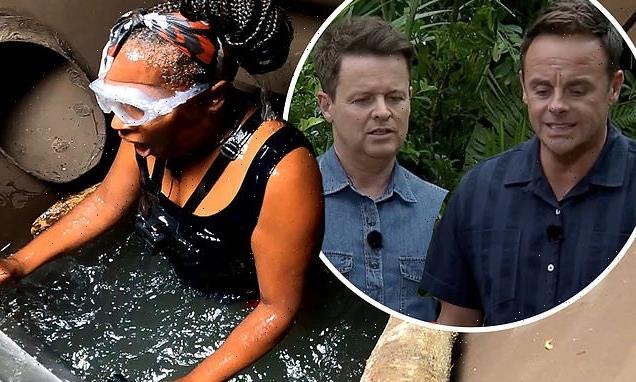 I'M A CELEB 2022 LIVE: Charlene and George only win two stars in trial

I’M A CELEB 2022 LIVE: Charlene White only manages two stars before getting out of the Watery Grave Bushtucker Trial with Boy George… as she cries for ‘disappointing’ camp

Baba is literally so sweet oh my god #imaceleb pic.twitter.com/u3DP7tpH3Y

owen is soo cute like i need him in my life he has the sweetest soul and i will protect him forever #ImACeleb pic.twitter.com/Ix5ToP8uFn

Mike read out a laminate: ‘Celebrities, tonight is your last night together. Tomorrow one of you will be the first to leave the jungle.

Sue in the Bush Telegraph said: ‘I don’t think any of us expected it to be tomorrow!’

The campmates said around camp how they were feeling about the news. 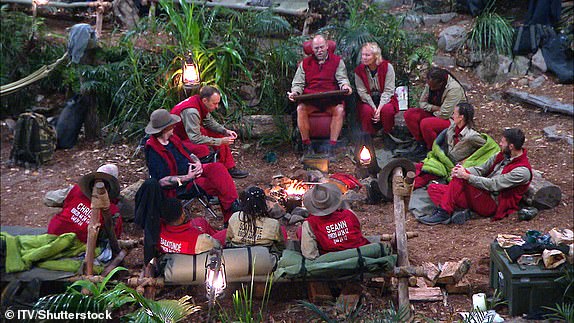 Not much meat on the bones.

Seann has a cry as Sue consoles him.

He got stressed after feeling like Scarlette will be annoyed by him as they share the washing up duties.

But Chris took the opportunity to pull his leg by singing in his ear – only for Sean to quip: ‘F*** off!’

Camp chefs are now Charlene and Jill. Washing up is Seann and Scarlette. Camp water is Owen and Babatúndé. Matt is put on dunny duty and Boy George and camp maintenance with Chris.

Matt read out a laminate about the campmates voting for their new camp leader: ‘The celebrity with the most votes will become the new leader. The first role of the new leader is to choose a deputy immediately. I shall now count the votes!’

Boy George said in the Bush Telegraph: ‘Please don’t let it be me. I don’t want responsibility. I spent the last 61 years avoiding it!’

Matt said: ‘The winner of the leadership is – Mike!’

Owen in Bush Telegraph said: ‘It’s going to be a shambles without him doing everything!’

Mike announced his deputy: ‘She’s always been at my side, it’s going to be Sue.’

The new leader and deputy had to distribute chores to the campmates.

Mike read out his decisions, saying that no-one was allowed to do the same job as before.

Mike said: ‘What we’ve tried to do is keep it as close to what we think people want to do.’ 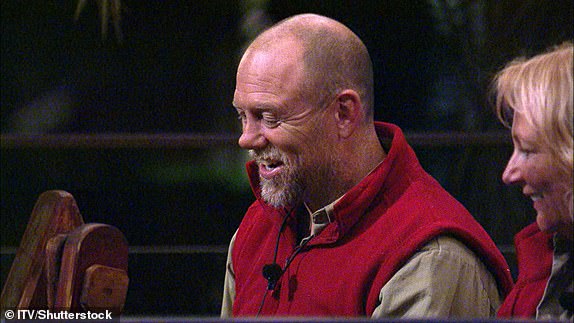 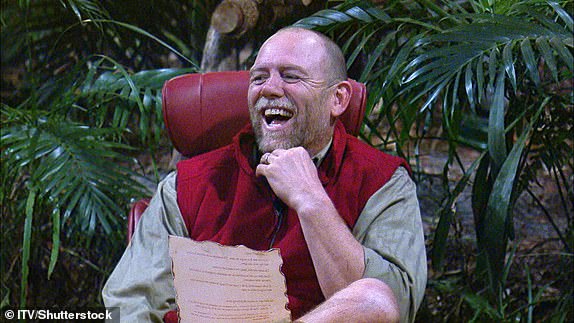 Mike’s voted in, and he picks Sue as his deputy.

You have been dishonest…. Tell the truth Boy George #imaceleb

This is so awkward between Boy George and Hancock #ImACeleb

i love @boygeorge and applaud his honesty and frankness #imaceleb pic.twitter.com/94m3J8K5QF

Later at the creek, Boy George told Seann: ‘Can’t stand Matt. I have tried to like him and I’ve failed. I find him slimy, I find him slippery. I find him just… I made a joke about chocolate. He just looked at me like… I wanted to say, “What are you looking at? Don’t you look at me like that.”

He continued: ‘I’ve tried to separate what I feel about him from who he is as a person, but I can’t.’ 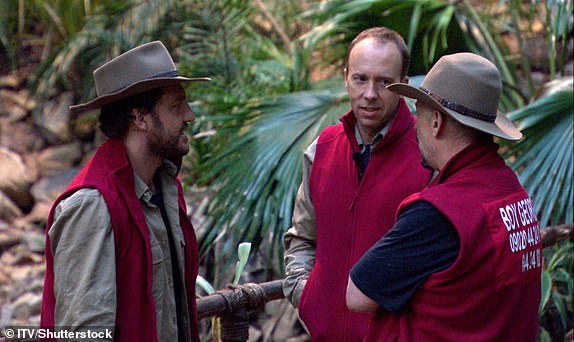 The question was: Who was born the closest to the Walkman being created?

Also it’s pretty obvious what side Charlene’s on re Matt Hancock. She’s made it pretty clear! #imaceleb #ImACeleb

Charlene explained her reasoning for not sleeping in the RV to Sue. She said: ‘I’m an impartial journalist, I can’t be sharing a room with a sitting MP because that just doesn’t sit well with me impartiality wise.

‘And I just think, if he were ever to become minister again how can I sit and question him about anything when I’ve shared a room with him?’

Sue in the Bush Telegraph added: ‘I absolutely see her point. When Charlene was talking about having to have impartiality being a newsreader it made total sense to me why it wouldn’t be great for her to be in an RV with Matt. Awkward.’

Charlene added: ‘I would say that every conversation we’ve had that Matt’s been here constantly involves me doing calculations in my head about impartiality and making sure it doesn’t go too much in one direction.

‘Constantly thinking about those guidelines and the broadcasting rules. It’s a constant thing that’s in my head on a daily basis.’ 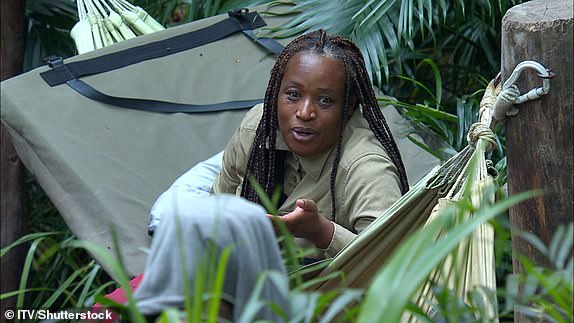 I’m not saying I’d be any better at that trial than Charlene, but what did she think #ImACeleb was going to be like?

Sue found Charlene in the shower and hugged her and made her cry again.

Charlene said: ‘I feel like I’ve let the team down.’

Sue said: ‘Everyone’s got a limit. We’ve all got limits. We’re not the Mikes in the world, OK. We have other strengths.’

Sue said: ‘When that happens it brings up everything.’

Charlene added: ‘I know why I came here…’

Sue asked: ‘What, show you can stick your head in a bunch of eels and a crocodile?’

Charlene replied: ‘Just to feel like I can conquer fear and really challenge myself and just be able to get through stuff. If I’m not doing that, what’s the point in me being here?’

Sue said: ‘I’d argue, if you look at your first day, what you did before you even got in here, and then if you look at what you were like the first night crying… you’ve conquered everything.’

Owen in the Bush Telegraph said: ‘Charlene looked devastated. She looked really disappointed in herself. Moments like that are where I love the camp, everyone came together, gave her a hug and made sure she’s alright.’

Me when Charlene said the words #ImACeleb pic.twitter.com/ZpPmTRmYN4 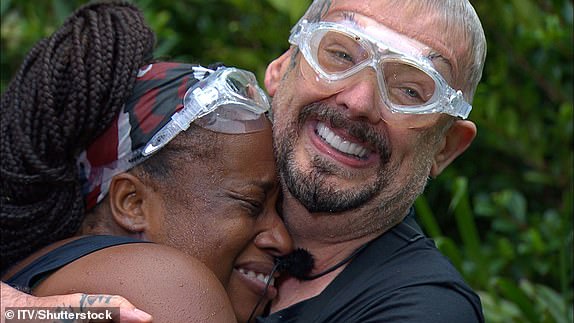 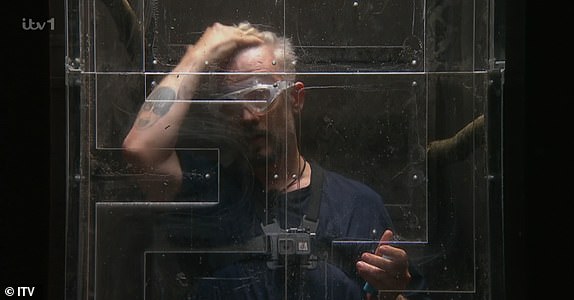 Charlene said: ‘I don’t think I can do this. I’ve just come out of the water as I can’t get in with the eels.’

Water spiders and mud crabs were added to their tombs.

Charlene admitted: ‘I’m not sure I can do this. I can’t even step in the water George, currently.’

Boy George said: ‘Calm down babe, you got this.’

Boy George to a crab said: ‘Excuse me, babe’

When Ant told her time was ticking, she said firmly: ‘I know that Anthony!’ 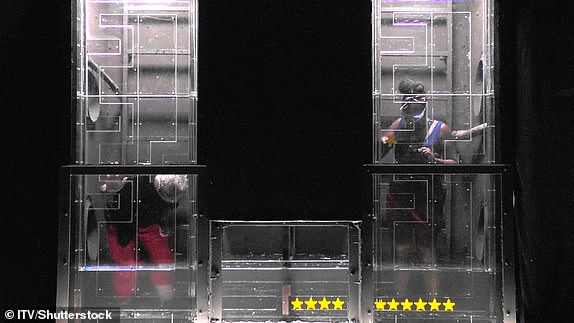 Ant explained the Trial: ‘This is Watery Grave. You both need to climb down inside these tombs and work together to release 11 stars.

‘The person in the first tomb will move a magnet to move the stars around the maze and through to the second tomb.

‘The celebrity in there will need to work the stars around their maze until they can be released. Once you get a star, get it in your star bag. Only stars in your star bag at the end of time will count.’

The most annoying song in #ImACeleb history pic.twitter.com/4DKspa9S5p

A snappy interaction between Matt and Sue.

Having been at the dunny area and finding water in the bowl, Sue asked camp who’d shaved. Learning it was Matt she said: ‘Empty the bowl.’

Matt replied: ‘Was it a great trial for you to pour the thing out?’

Mike to Matt said: ‘So much of a trial that you couldn’t do it.’ 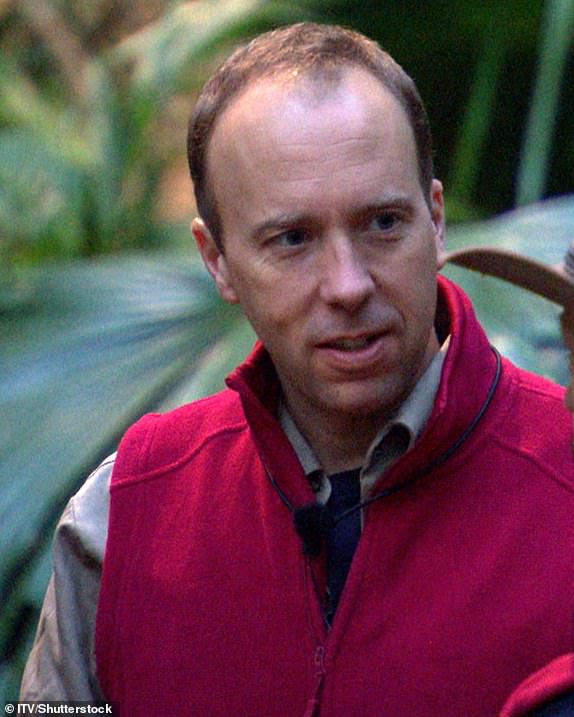 The 23-year-old Hollyoaks actor, who has been the celebrity which seems to be struggling the most with the lack of food in the jungle, has continually put himself up for challenges in the hopes of winning meals.

And after Matt was one of the lucky three picked to head to the beach for a lavish barbecue, Owen was not best pleased when the MP asked for spare food upon his return to camp during dinner time.

Speaking in the Bush Telegraph, Owen mentioned that Matt was asking for any remaining scraps since their eight-star meal was made.

‘The absolute cheek of it,’ he said.

‘Especially after you’ve just been to the beach all day.

#ImACeleb
Wonder who will be the first out, hopefully the celeb has done everything in their experience before they leave.

Be a shame if they haven’t
Xx❤️👄

Vernon Kay has branded I’m A Celeb’s Charlene White ‘out of order’ for refusing to sleep in the RV.

The former Family Fortunes host, who appeared on the 2020 series of the ITV show, expressed his opinion on the controversial topic while appearing on Radio X.

It comes after Charlene’s family broke their silence over her refusal to sleep in a comfy bed beside former health secretary Matt Hancock.

I’m A Celebrity’s Charlene White is seen squealing in terror as she takes part in Friday night’s Bushtucker Trial with Boy George.

In a preview of the latest challenge Watery Grave, the Loose Women star, 42, and the singer, 61, battle to win stars for camp, with the duo locked in tanks as they slowly fill with water and water-based creatures.

However, at one point Charlene – who is bookies favourite to be voted out first – attempts to climb back up the ladder as she joined in the tank by a rather large visitor.

Stay with us for the evening as we provide updates on the 13th episode of I’m A Celebrity… Get Me Out Of Here! 2022.

New Doctor Who companion announced on Children In Need