Home » Celebrities » ‘I started crying!’ Carol Vorderman on ‘traumatic’ Stars In Their Eyes appearance as Cher 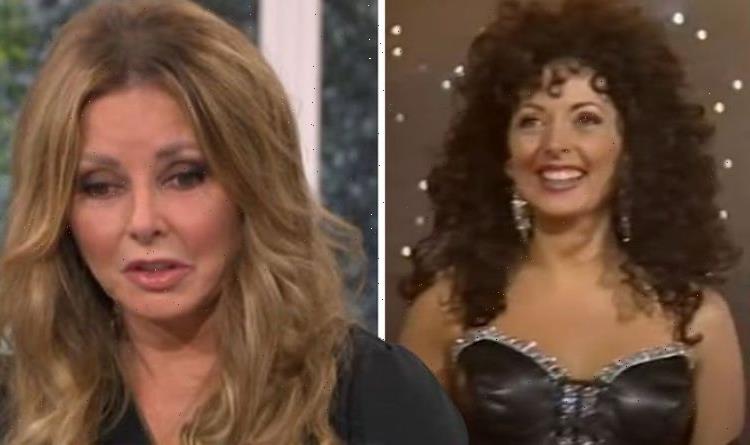 ‘I started crying!’ Carol Vorderman on ‘traumatic’ Stars In Their Eyes appearance as Cher

Carol Vorderman recalls performing on Stars in Their Eyes

As we head into 2022, Carol Vorderman, 61, looked back at the past year and all she got up to. But her memories took her back much, much further, as she discussed her appearance on the first ever celebrity version of Stars in Their Eyes in 1998.

I started crying! I was in such a state of trauma

During a chat on her BBC Wales radio show, she recalled her humiliation as she dressed up in a leather outfit to imitate iconic singer Cher.

To get into character as the If I Could Turn Back Time singer, she was decked out in a black curly wig, a leather jacket and fishnet tights.

To this day, it remains one of her favourite get-ups but despite looking like she was having the time of her life while she belted out the lyrics to The Shoop Shoop Song (It’s In His Kiss), Carol confessed the whole experience was “traumatising”.

Remembering how the opportunity came about, she revealed it was her friend Nigel Horne who urged her to portray the pop star, because he “had the right outfit” for the occasion.

“So, I chose this song and Matthew Kelly was hosting it, who I adore!” she explained, before branding the presenter the “nicest man on the planet”.

“We went in and you all do the introductions first, so you go: ‘Tonight Matthew, I’m going to be Cher…’ the audience went mental,” Carol beamed.

“I came out as a tart dressed in leather!”

Her co-star quickly chimed: “I remember! It was iconic.”

Carol continued: “[I came] through the smoke and there is no into on this track, no music so you can walk down to the mic.

“You have to just start and the audience seemed so loud I couldn’t hear anything!”

It should have been a sign of things to come, and soon the TV star realised she was in trouble.

“I thought I better just start, so I started and was three bars out; everything went so wrong.

“I started crying! I was in such a state of trauma.”

She remembered being given the opportunity to start again, before having to tell Matthew she was unable to hear anything.

With Carol’s concerns duly noted, the producers killed the smoke, the noise from the audience and all the other distractions getting in the way of the presenter being able to sing.

“I sang, but it was such a trauma,” Carol winced.

Her co-star interjected with a note of motivation: “You know what Cher would have said…

The pair laughed before the Countdown legend added: “I died a thousand times.

“I died when I watched it, it was just so traumatic.”