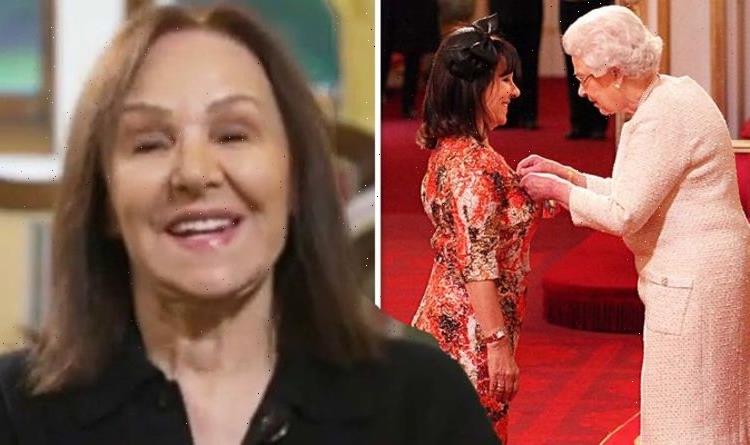 Dame Arlene Phillips, 78, said it was “incredible” meeting the Queen and noted a quality in particular that took her by surprise. The I’m A Celebrity… Get Me Out Of Here! star made the comments while discussing her DBE, which she was awarded in the Queen’s birthday honours earlier this year for her services to dance and charity.

Despite not yet having a ceremony for the award, Arlene has previously met Her Majesty when receiving her OBE and CBE.

On her new damehood, Arlene told the Sunday Times that receiving the award was a “thrill” and a “shock”, because she didn’t think she was “dame material”.

She continued: “No ceremony yet, I think there’s a massive backlog. But I’ve met the Queen at the others and at first nights.”

She said: “Even though she’s not tall, she has the elegance of a tall woman, this delicacy and charm. I think I stared over-closely at her skin, it’s so beautiful.”

Arlene’s career has spanned almost five decades with her becoming a household name as the director and choreographer of the Hot Gossip dance troupe, which she formed in 1974.

The dancers became a regular feature on The Kenny Everett Show and later landed their own Channel 4 special, The Very Hot Gossip Show, in the early 1980s.

Arlene then became one of the original Strictly judges alongside Craig Revel Horwood, Len Goodman and Bruno Tonioli when it debuted in 2004.

Arlene was on the panel until 2009, when she was replaced by former Strictly winner Alesha Dixon.

Her departure from the show sparked criticism that the BBC had dropped her because of her age.

The row even led to a rant by Harriet Harman, then Equalities Minister, in the House of Commons.

Ms Harman said: “I think it’s absolutely shocking that Arlene Phillips is not going to be a judge on Strictly Come Dancing.

“As Equalities Minister, I am suspicious that there is age discrimination there. So, I’d like to take the opportunity of asking the BBC: it is not too late, we want Arlene Phillips in the next edition of Strictly Come Dancing.”

Responding to the allegations, a BBC spokesperson told the Telegraph: “Harriet Harman is entitled to her view and it is great to know she’s a fan of the show.

“Age had absolutely nothing to do with the decision to replace Arlene Phillips. The BBC employs numerous mature presenters across the schedule.”

This Autumn, Arlene took part in I’m A Celebrity…Get Me Out of Here! and was the oldest contestant in the show’s history.

She was voted out first but says she doesn’t think it had anything to do with “ageism”.

She told the aforementioned publication: “I was so happy to be out, I had 100 per cent achieved what I wanted. And with age, in this situation, you are maybe not as strong or as fast or as energised. And I did feel my age, I did feel old.

“It was mostly after Richard went… He was closer to my age than anybody [he’s 65], and I felt comfortable with him, but without him I thought, ‘Wow! I am the great-grandmother here without him to bridge that gap’.”