Homes Under The Hammer presenter Martin Roberts, 56, fronts the show alongside Dion Dublin, 51, and Martel Maxwell. Earlier this week, he took to Twitter to answer questions from fans as part of his weekly Ask Martin Mondays Q&A.

Habits might not be time-related – I think it’s more likely to be random!

One eagle-eyed viewer queried Dion’s mannerisms as they insisted he had been copying Martin.

They asked: “#askmartinmondays Did someone tell Dion to stop holding/rubbing his hands when talking to camera and instead put them in his pockets shortly after he started?

“His early shows are full of it (obvs copying u) but then he suddenly stops. I’ve always wanted to find out. Weird, I know.”

In response to the tweet, Martin said the episodes may not run in order of filming. 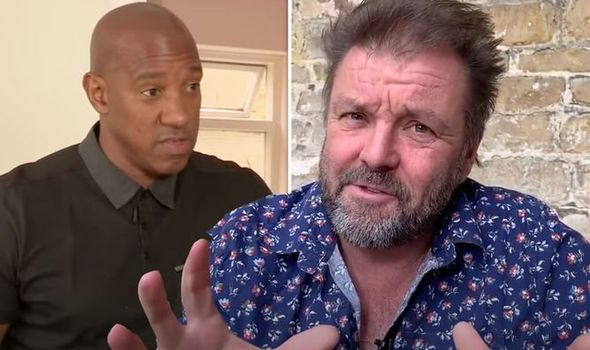 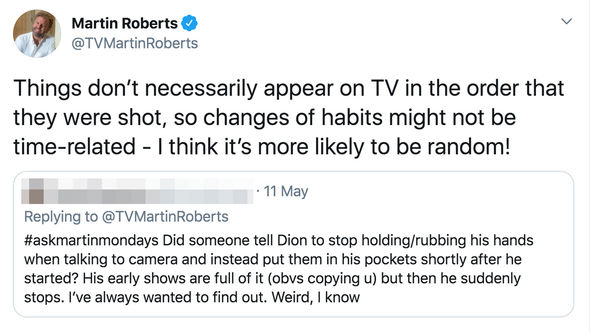 He replied: “Things don’t necessarily appear on TV in the order that they were shot, so changes of habits might not be time-related – I think it’s more likely to be random!”

Another viewer asked when new episodes of the show will be aired.

They wrote: “When will #HomesUnderTheHammer be renewed for broadcast again?? Seems like all they show these days is repeats!! Love ya Mart xx.”

“Thank you! xx There is still new stuff going into the schedule, but not every day of the week!” 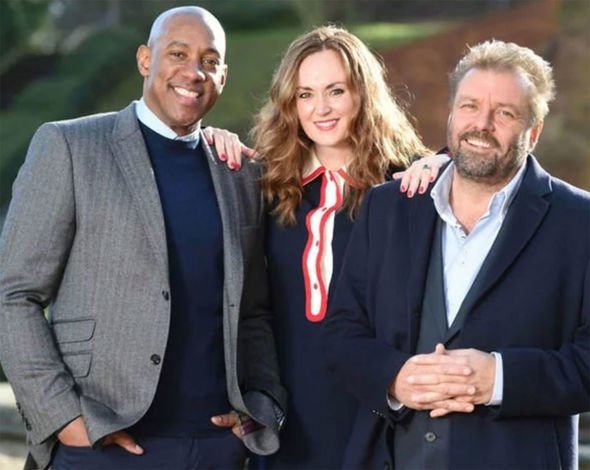 Like many other television shows, filming for the property programme has been put on hold due to the coronavirus pandemic.

The presenter admitted he has “no idea” when the cast will return to film new episodes.

He added: ”Not yet! And currently no idea when we will! But keen to get on filming the next series when it’s safe to do so!”

Martin has been fronting the show since its inception in 2003.

He began hosting the show alongside ex presenter Lucy Alexander, who left in 2016.

Despite being replaced by Martel Maxwell following her departure, Lucy said she wouldn’t rule out returning to the show.

She previously told Express.co.uk: “I would never say never.

“Let’s see what happens in the future. I would be lying if I said I didn’t miss it.”

She continued: “It was a lot of hard work for a lot of years.”

On leaving her co-star Martin behind on the show, she added: “Of course he misses me! He said it was like going through a divorce when I left.”

She has since gone on to presenter other shows including The Customer Is Always Right.

Homes Under The Hammer continues today at 10.45am on BBC One.

The Queen, William, Kate & Charles stop hiring staff as they continue to isolate with reduced help at royal residences
Entertainment