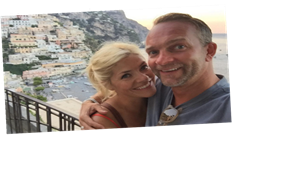 She rarely discusses her marriage to husband Dan Baldwin, but in Tuesday's episode of This Morning, Holly Willoughby revealed what he bought her for Christmas.

The mum-of-three, who stunned in a gorgeous pink sequin dress on Dancing On Ice, said Dan got her a pair of trainers as one of her presents.

During a segment about the newest trainer trends with Lisa Snowdon, the 39 year old said: "Dan bought me a pair of high tops for Christmas actually.

"I actually noticed you had them on and I was like, 'Ahh, I need to get those out'

Holly and Dan got married in 2007 at Amberley Castle, West Sussex.

The couple initially met back in 2004 on the sets of Ministry Mayhem and began dating.

They are now parents to Harry, 11, Belle, nine, and Chester, six.

In April 2020, the presenter opened up about how the pair have been able to navigate their relationship while in lockdown.

Speaking on This Morning, Holly and co-host Phillip Schofield interacted with viewers who called into the show about how they're coping with their families.

She explained that they haven't argued since going into quarantine because when they spend time apart in the house and Dan surprises her by doing little things that brightens her day.

"I also think that doing little nice things gives you a bit of leeway in other areas as well," Holly divulged.

"Like if I'm sort of doing something and Dan will come and make me a cup of tea or I'll come back and he would've put the washing away – and I haven't asked him.

"Then I sort of turn a blind eye to all these other things, so I think doing little things to help makes a big difference," she expressed.

The blonde beauty, who made a bizarre Craig David comparison, shared an emotional message with viewers last week about the risk of lockdown rules being tightened.

She said: "If you are struggling and if you've been ok and just about holding on up until now and this is the thing that tips you over the edge, the most important thing is don't suffer in silence.

“And you might not be able to see that person or get in that support bubble but you can ask for help, you can call someone."

Here’s Why Twitter Is Annoyed With HGTV’s Ty Breaker