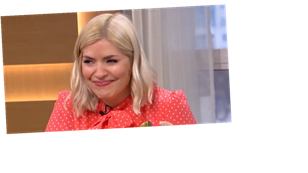 She's made plenty of innuendos during her time on This Morning, and in Monday's episode, Holly Willoughby once again made a cheeky comment, this time about beans.

The presenter, who shared her disappointment over having her 40th birthday party being cancelled, was trying different variations of beans on toast during the cooking segment with Phil Vickery.

Holly's co-host Phillip Schofield joked: "It's not the most flattering way you've described something."

The blonde beauty, 39, responded: "Listen, I'm doing really well for someone who started by saying I don't like beans, I now like them five ways!"

Holly immediately realised how her comment sounded and covered her mouth as Phillip and Phil began laughing.

She appeared very embarrassed and proceeded to place her napkin over her mouth.

Attempting to move on from the joke, chef Phil asked: "Shall I continue?" as the trio continued to giggle.

A follower wrote: "Holly and Phil giggling over 5 ways with beans has made me laugh out loud!!!! They have been a godsend through covid! Just what we all need!" [sic]

Another expressed: "Holly and Phil with the beans Phil prepared. Just made me laugh loudly. Dog thinks I'm nuts, but thanks to you all for the best laugh in ages!!" [sic]

"Like Holly I too have liked baked beans… Until recently I started pimping them up as on This Morning today," [sic] a loyal viewer shared.

Pensioner, 72, reveals how she found love during lockdown

Last-Minute Valentine’s Day Gifts For Your Partner, Based On Their Zodiac Sign
Entertainment