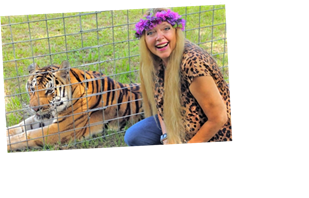 Here’s How To Watch Netflix’s ‘Tiger Queens: The Tiger King Musical’ On TikTok

At the start of 2020 when America was just beginning lockdown to prevent the spread of the coronavirus pandemic, a bizarre docuseries about big cat enthusiasts suddenly became the most talked about show in the country. A year later, the general opinion on Tiger King has morphed a bit, but there’s no denying that the series will always be remembered as one of the most definitive pieces of culture of the pandemic. Netflix has big plans to celebrate the catty drama’s anniversary, so here’s how to watch Netflix’s Tiger Queens: The Tiger King Musical on TikTok. After all, what better way is there to commemorate Tiger King than with an event that’s just as strange as the show itself?

Netflix announced a TikTok musical inspired by Tiger King on March 20, 2021, which was the one-year anniversary of the docuseries’ release. The event will star three iconic drag queens from RuPaul’s Drag Race: makeup maven Kim Chi will play Carole Baskin, current-reigning Miss Congeniality Heidi N Closet will play a tiger, and the ever-rebellious Willam will portray Joe Exotic. The streaming service also teased more special quests will appear, so fans might see more queens pop up as Doc Antle, Joe’s husbands, or other standout figures from the show.

To watch the madness go down, all you need to do is check out Netflix’s TikTok account on Sunday, March 28, when the musical will be uploaded.

Tiger Queens will mark Netflix’s first foray into the recent TikTok musicals trend. Back at the end of 2020, some fan-made songs for a fictional musical of the Disney film Ratatouille went viral on TikTok, which encouraged more users to submit their own songs. This quickly led to a full-fledged Ratatouille musical, which got the full Broadway treatment (minus, you know, actual Broadway) at the start of 2021 when stage actors including Tituss Burgess, Wayne Brady, and Adam Lambert starred in a virtual production to benefit The Actors Fund. The success of the Ratatouille musical has inspired more original music on TikTok, including a Bridgerton TikTok musical.

Get ready for music, mayhem, and a whole lot of tiger print when Tiger Queen: The Tiger King Musical drops on Netflix’s TikTok on Sunday, March 28.

The Strange Job Donald Trump Once Wanted In NYC