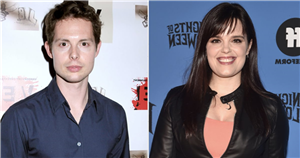 It’s official: “Halloweentown” onscreen-enemies-turned-real-life-lovers Kimberly J. Brown and Daniel Kountz are engaged! Brown, who played Marnie in 1998 classic film, revealed the big news via Instagram on June 30. “Have I introduced you guys to my Fiancée? ☺️💍❤️ #isaidyes,” she captioned a selfie of herself with Kountz. In it, she’s showing off her engagement ring. Kountz also shared the news with an Instagram video montage captioned, “She said yes‼️❤️ 💍 Gunna love you forever @officialkjb.”

Brown and Kountz went public with their offscreen romance in July 2018 when they posted a smooch-filled photo for National Kissing Day. The pair only teased their rumored relationship before then, sharing sweet selfies for nearly a year before putting all rumblings to rest.

The couple first met while filming 2001’s “Halloweentown II,” but things didn’t turn romantic until the two actors reconnected a decade later. “In real life, we had no romantic feelings for each other at all while working together,” Brown explained in a June 2021 TikTok. In October, Kountz (who played Kal in the 2001 movie) told E! News that their romantic reunion “took me by surprise,” as they hadn’t seen each other in years. However, Brown said they “unexpectedly fell in love” and now they’re one step closer to tying the knot!