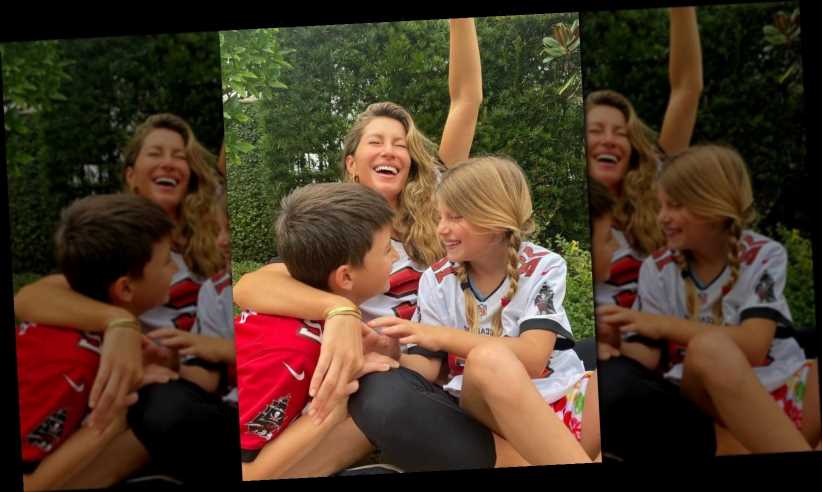 Tampa Bay Buccaneers fans were thrilled when Tom Brady led his team to victory in Sunday afternoon’s matchup against the Aaron Rodgers-helmed Green Bay Packers. The victory means the Florida team advances to the Super Bowl, where they will play the Kansas City Chiefs, led by Patrick Mahomes (via NFL.com).

Of course, Brady’s biggest fans are his family — his wife since 2009, Gisele Bündchen, and their kids, Benjamin and Vivian (via Insider). His son with ex Bridget Moynahan, Jack, is also among dad’s cheering section. In fact, the 13-year-old was on hand to give the quarterback a hug following the exciting game (via ET Online). Meanwhile, at home, Bündchen and their two kiddos posted an adorable pic to Instagram of how excited they were that Brady is going to the Super Bowl for the tenth time (via The New York Times).

Along with a shot of the supermodel mom embracing her children, Bündchen wrote as a caption, “We are already cheering here papai! We love you! Let’s go @tombrady !! Let’s go Bucs!!!”

With nearly 630,000 likes at time writing, Bündchen’s post shows that clearly we aren’t completely over Tom Brady heading to the Super Bowl! After all, this is his first time taking the Buccaneers to the big game — and interestingly, the matchup will happen in Tampa. Consider that this is the very first time a Super Bowl will take place in one of the team’s home stadiums (via WTSP).

Meanwhile, Brady’s support team took to Instagram earlier in the day — before his historic win — to cheer him on. This time, it was Bündchen shaing a selfie with the family dogs, captioning the sweet image, “The cheer squad is ready over here!!! Let’s go papai! Let’s go Bucs!!!”

Whether it was having his loving family behind him, or fate, indeed the 43-year-old won and we can’t wait to see his cheering section on the big day, which is February 7.