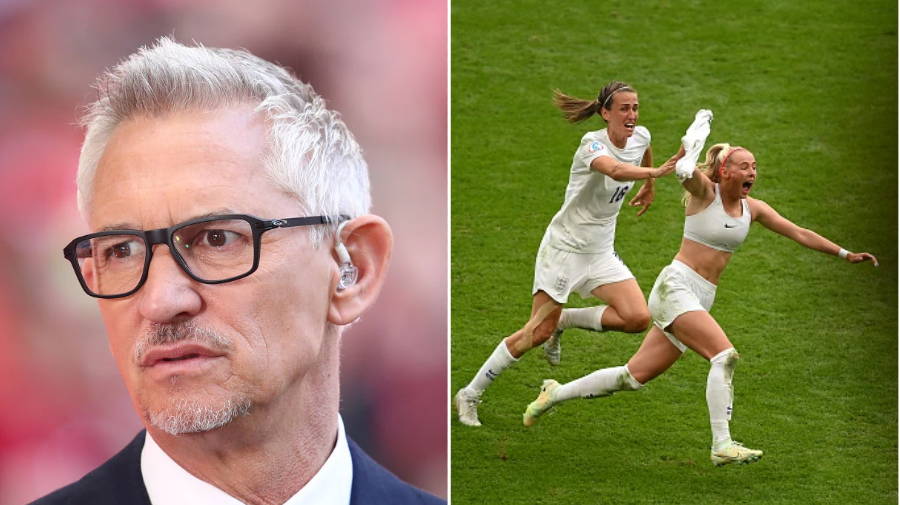 Gary Lineker has come under fire for one of his tweets celebrating the Lioness’ historic Euro 2022 win, leading the broadcaster to delete the offending post, featuring an ill-judged pun.

The former England player live-tweeted excitedly along with Sunday’s match, where goals from Ella Toone and Chloe Kelly saw the national side storm to a 2-1 victory, clinching the country’s first major trophy in 56 years.

As the England women’s team celebrated their triumph, Gary posted a comment that didn’t land as well as his others, with many fans branding it ‘sexist’.

The pundit wrote: ‘The @Lionesses have only gone and done it, and Kelly is England’s heroine, bra none.’

His now-deleted tweet seemed to refer to Chloe removing her England shirt in celebration, spinning it round over her head, but plenty of his followers were unimpressed with the remark, sparking an online discussion.

‘It’s just yet another example of casual sexism. Why mention her bra at all? Why not just congratulate her on the goal? Women put up with these kind of “jokes” all the time and we’re fed up of it,’ replied one user, while another accused the retired footballer of ‘belittling’ the team and its achievements.

Another slammed his comment as ‘the puerile joke of a 13-year-old boy who has never see a bra before’.

‘It’s a pity because it was a historic win. One the men’s team chased. It’s important we call out the normalised daily misogyny,’ they added.

Gary then responded to a request for him to apologise and ‘condemn’ sexist responses to his tweet on Monday morning, explaining he had deleted the tweet as many had ‘missed the context’ by not seeing the game.

The criticism against Gary comes after campaigns were launched to fight against sexism in football and online ahead of the Euro 2022 championship.

This includes the fan-led #HerGameToo effort and EE’s Hope United campaign, which pushes back against online misogyny with a mixed-gender squad of footballers involved, including Ellen White, Lucy Bronze, Declan Rice and Jordan Henderson.