After being disappointed by the final two episodes of Game Of Thrones, fans of Daenerys Stormborn are looking for solace anywhere they can get it.

And that includes, shall we say, outside the law.

As you may have completely missed while trying to avoid spoilers, some toolbag decided to leak the plot points for episodes 4, 5, and 6 before they aired.

Fans who read the posts, which originally appeared on Reddit, generally hated them and hoped they were fake. But unfortunately for those Team Khaleesi members (and Team Good Writing members), they were all spot on.

So clearly this wasn’t some yahoo with really good guesses; this leaker had inside info. Maybe an HBO employee or someone who knew one.

The point is, their info was legit. So when they leaked something else a few days after the finale, people took notice.

First, let’s rewind to Dany’s fate, assuming you haven’t tried to wipe it from your memory yet.

After the deaths of her second dragon Rhaegal and closest adviser Missandei, Dany finally attacks King’s Landing with all her forces.

This time she’s ready for the giant crossbows and annihilates all with her last dragon, Drogon.

Unfortunately after the city surrenders, she turns her dragonfire on the citizens, roasting thousands of innocent women and children along with the rest of Cersei’s soldiers.

(Never mind that she once explicitly told her then-new army of Unsullied to not hurt a single child when they turned on their masters, and never mind how she was once devastated when her dragons killed one child.)

After Tyrion convinces Jon Snow she’s a danger to the rest of the world next, her nephew/lover stabs her in the heart, and the Mother of Dragons dies on the cold stone floor of the throne room.

After melting the Iron Throne in a rage, Drogon scoops up his momma in his giant claw and flies away with her, into the distance. 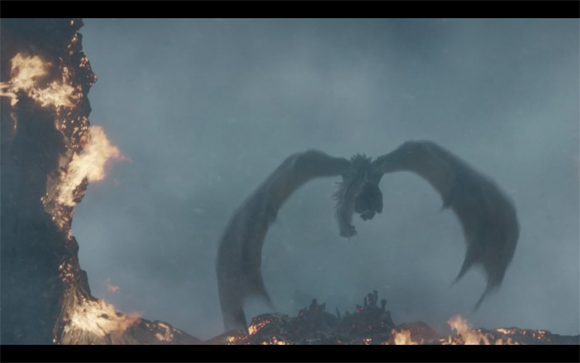 OK, so that’s the end of the story of Daenerys, the Khaleesi, the Unburnt, the Breaker of Chains, all that.

Here’s where the leaker comes in.

According to this Deepwood Motte Throat, there was originally a POST CREDITS SCENE with Emilia Clarke that didn’t make the cut in the final edit!

Does this mean the Dragon Queen lived after all??

Here’s what fans are now theorizing that was all about…

“He was last spotted flying east, towards Volantis.”

But why is his location important?

Remember Kinvara, the other red priestess of the Lord of Light? The one Tyrion and Varys met with in Meereen? 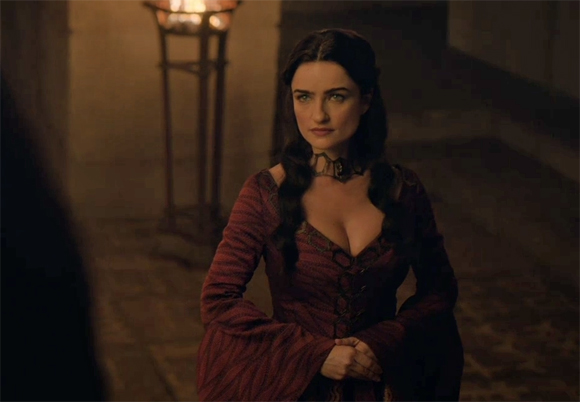 Like Melisandre and Thoros of Myr before her, Kinvara (an amalgam of multiple characters from the books) may also have the power to bring people back to life.

Unlike her fellow folks of the cerise cloth, who seemed conflicted about whom to follow, she was all in on Daenerys being Azor Ahai, the Princess who was Promised.

So the fan theory now goes, Drogon brought Dany to Volantis to be resurrected by Kinvara.

The post credits scene would have been her waking up much as Jon Snow had before, perhaps even with Bran as witness from a bird’s eye view.

So what do YOU think, Game Of Thrones fans? Would that stinger have saved the episode for you?

Or would it just have been too confusing??

As with much of George R.R. Martin‘s story, this could be one of those things fans are left to ponder forever. 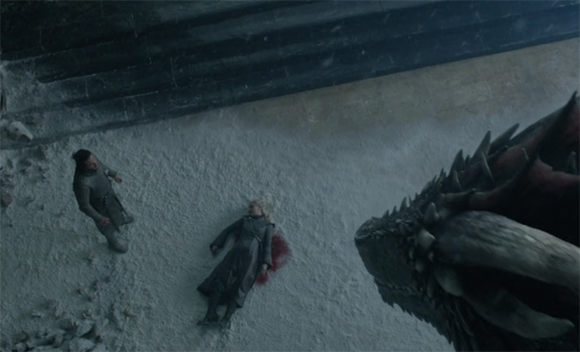