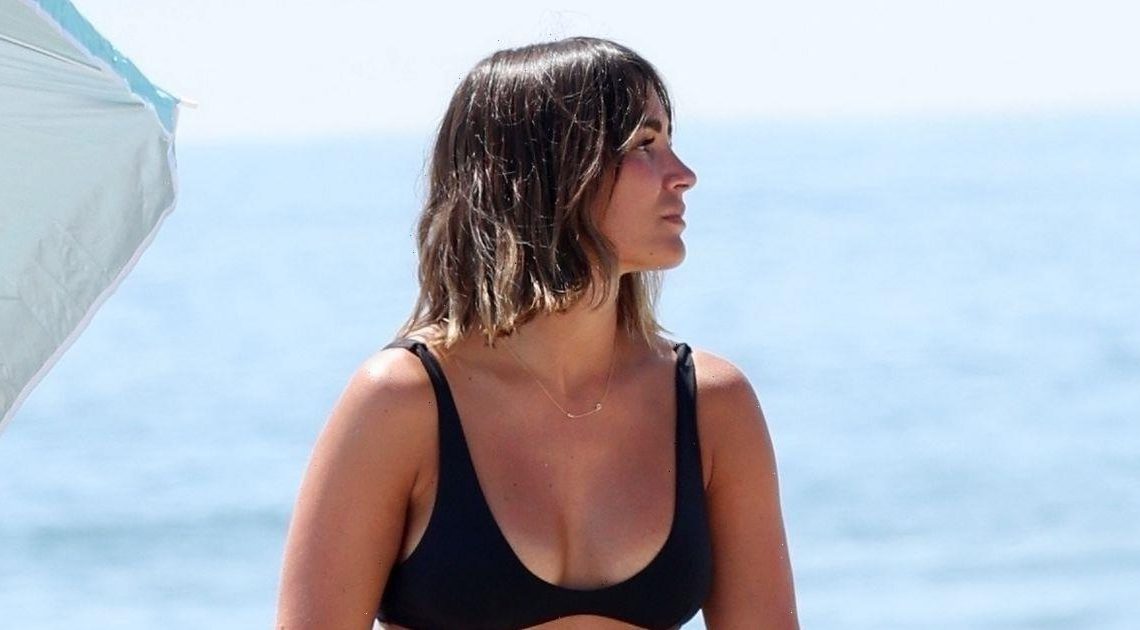 Frankie Bridge looked happy and relaxed as she enjoyed a beach break in Malibu, California alongside husband Wayne and their two sons.

The presenter, 33, was spotted relaxing on the beach and taking a dip in the sea as the family holidayed on the Californian Coast.

Former The Saturdays singer Frankie wore a simple black bikini and accessorised her look with a fine gold necklace and her striking engagement and wedding rings on her left hand.

The star kept her look make-up free and wore her short, stylish bob loose while taking a walk down the beach. Taking her look off the sand, Frankie was also seen pairing her bikini top with loose cream trousers, a white shirt and a pair of flip flops.

She was joined by former footballer husband Wayne, 41, who kept cool in a pair of grey swim shorts and a hat. He was also seen tucking into a sandwich on the beach and later covered up in a white long-sleeved t-shirt as he left the coastline.

The couple were joined by some friends as well as their two sons: Parker, eight, and Carter, six. Earlier that day, Frankie had shared an Instagram post from the day on the beach, showing her two boys smiling as they played in the sand.

She also posted a photo of the family enjoying some time in the waves, captioning the post: “Beach day! … short lived…But fun all the same.”

The family usually live in a gorgeous home in Surrey, but swapped the UK for Los Angeles as they took a break from their busy lives. Frankie and Wayne married in 2014 and they've been fairly open about both the highs and the lows of their decade relationship.

In a recent interview on Loose Women, Frankie admitted that she was the one parented by Wayne in their relationship.

Frankie added that she liked that Wayne “parents” her as she confessed she had a tendency to be generally messy at home and often needed guidance on how to fill a dishwasher. “I would say it's probably more around the other way, Wayne parents me. I quite like it,” the former popstar said.

“I'm useless around the house, he always says I don't know about the dishwasher. I don't stack it right so I just leave it to him. I'm a put it into the sink and let Wayne deal with it.” ”Usually, it's the woman who says he doesn't know how to do anything so I do it.”

Frankie continued: “I'm quite messy, he's really tidy. Don't get me wrong, we have our roles in the house,” as Nadia said: ”It must be great for him since you joined Loose Women because we now think Wayne is a god.”